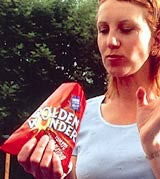 Golden Wonder is to go head-on against rival Walkers with the launch of a football-themed crisp snack ahead of this year’s World Cup.

The snack, called Goalden Balls, is to be launched in the late spring to capitalise on the increased interest in football triggered by this summer’s FIFA World Cup. The cheese-flavoured product is a round version of the company’s Wotsits brand.

The move is understood to have been in response to the launch of Walkers’ Footballs, a bacon-flavoured “puff” targeting young males, which will be on the shelves around the same time.

The launch of Goalden Balls will be backed by television advertising through Bartle Bogle Hegarty.

The launch of Walkers’ Footballs will be backed by an ad spend of about £2m, including TV advertising by Abbott Mead Vickers.BBDO featuring ex-footballer Gary Lineker (MW December 12, 2001).

One industry insider claims that Golden Wonder’s product is a direct response to Walkers’ product, but he tipped Golden Wonder to win the sales war.

“I think Walkers has lost the plot slightly. I think the good old British public will prefer a cheesy product,” the source says.

Levi’s is launching a television ad campaign for its Engineered Jeans this spring, created by Bartle Bogle Hegarty (BBH). The pan-European campaign for Engineered Jeans, launched last year, will encompass all media including cinema, outdoor displays, print and digital, throughout the spring. It will feature the tagline: ‘Freedom to move’. Media was bought by Starcom […]

If tobacco advertising legitimises smoking, how does Chris Powell of BMP DDB (MW December 6, 2001) explain the case of Leah Betts? After the tragic death of Miss Betts, her parents conducted a campaign to beg young people not to use ecstasy. What was the result? Home Office figures later revealed that young people’s consumption […]

Vizzavi, the troubled mobile Internet portal jointly owned by Vodafone and Vivendi Universal, has promoted chief marketer Guy Laurence to chief executive, replacing Evan Newmark. The move is part of a restructuring that will see 100 jobs cut across Europe.