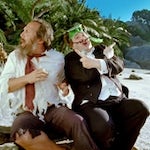 The commitment comes after Admiral Group, the owner of rival Confused.com, said it had lost its lead in the sector to GoCompare.

The two have been locked in a battle alongside rivals Compare-themarket and Moneysupermarket for share and all have launched high-profile ad campaigns to differentiate themselves.

Nick Hall, head of marketing at GoCompare, predicts the “level of intensity” seen in advertising the leading comparison sites will be maintained in the near-term with the “battle” staying above-the-line.