Louis Vuitton is poised to break luxury brand tradition by launching its first television and cinema ad. The ad is intended to be an “intensely atmospheric” representation of travel and will hark back to Vuitton’s core offering of luxury luggage.

Unlike the press campaign, and the campaigns of its luxury rivals, the screen spot is devoid of famous faces and has limited product shots. Analysts say this is indicative of the leather goods company, founded in 1854, reclaiming its historic luxury roots.

Verdict Research retail analyst Maureen Hinton says the brand has been going through a period of being “over exposed”. “But recently its new product range has made it more established as a luxury brand,” she adds.

Until 20 years ago the name was associated more with royalty than with stars. Today, Louis Vuitton is not only the staple of every footballer’s wife, it is the most counterfeited brand in the world. Some experts estimate that just over 1% of the items bearing the trademarked LV monogram are authentic. Ironically, the iconic monogram was only introduced in 1896 by Vuitton’s son Georges – as a device intended to prevent counterfeiting.

In 1987, the merger of champagne brand Moët Hennessy and Louis Vuitton spawned holding group LVMH. Two years later, Christian Dior chief Bernard Arnault – a man who is renowned for his marketing skills and tight control over how and where products are sold – came out on top in a fierce battle to control Louis Vuitton.

Sandford C Bernstein luxury goods analyst Luca Solca says the merger “brought the brand to a whole new level”. “The point of being a luxury brand is to be winning in business and strategic terms,” he adds.

“To keep brands innovative, you need to inject creative talent,” says Solca, but adds that brands like Louis Vuitton are “bigger” than the designers working for them.

Verdict’s Hinton argues that a fashion brand can increase its popularity with a new designer: “Look at how Gucci came back when Tom Ford took over,” she says.

However, this was not always the case with Vuitton. Hinton says: “When it became a fashion brand, it got out of hand.” She adds that now it is becoming realigned in its luxury status, the brand can make a comeback in terms of exclusivity. “It has come back from that tacky image and become a solid luxury brand again. The group it is part of has benefited from that.”

Solca, meanwhile, says that while the new campaign reinstates the “core heritage” of Vuitton as a luxury brand, it will also appeal to “the aspirations of consumers”.

“The screen campaign is a very clever move, in a way,” he says. “Luxury is based on fixed cost. In business terms, the campaign is a way to create a gap between brands that can afford it and those that can’t.”

Despite economic conditions, Vuitton’s holding group LVMH reported growth of 8% in 2007 and says growth will continue in 2008. As a group, LVMH is “doing very well and the strategy is doing very well for it,” says Hinton.

Verdict research published at the end of last year says that growth in regions including China will nearly treble in value by 2012. Louis Vuitton opened its first store at Palace Hotel in Beijing in 1992 – 14 years after its first Asian push with stores in Tokyo and Osaka.

For a brand like Vuitton, China is an important area of growth, says Solca, who warns the region is difficult and expensive to penetrate. Hinton agrees: “China will make a difference to Vuitton because its population is so large.”

Louis Vuitton’s move into TV and cinema ads should also widen appeal to the average consumer. Hinton says luxury is expanding to become “a whole lifestyle”, citing Armani’s hotel line as evidence. “Re-establishing Vuitton as a brand rubs off on everything it does,” she adds.

Louis Vuitton could do worse than look to rival Burberry for inspiration. Burberry faced a similar crisis when its association with “chav culture” caused profits to dip in 2005. A Kate Moss ad campaign and presence in China have now brought it back as a key player in the luxury sector. “Burberry has generally come back,” says Hinton. “Brands are pushing the barriers up so there is an even bigger gulf between them and the high street.”.

1854: Louis Vuitton was founded and its first store opened in Paris
1987: The merger of Moët Hennessy and Louis Vuitton creates LVMH
1992: First Louis Vuitton store opens in in China, at Palace Hotel, Beijing
1998: Marc Jacobs joins as artistic director and created a fashion line for men and women
2008: Louis Vuitton breaks its first cinema and TV campaign to showcase the brand. 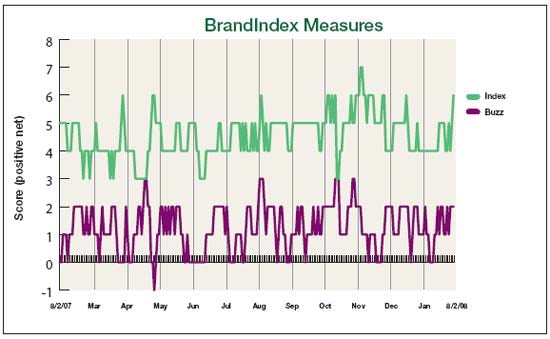 Clear Channel Communications, the US media group, has reported a 52% increase in earnings for the fourth quarter of last year, which it puts down to strong growth in its international outdoor sales. The company says revenues for its outdoor division, for the year to December 31, were up 13% to $3.3bn (£1.67bn). Overall revenues […]

Former Barclays marketer Simon Gulliford has resurfaced at Standard Life as its first chief marketing officer. The former Barclays group marketing director, who left the finance giant in 2004 to become a marketing consultant, will join Standard Life next month and work three days a week. He will remain a consultant and non-executive director for […]

‘There isnt a typical working day. If I am working at home I like to start the day by taking the kids to school before responding to enquiries, preparing presentations for the next days pitch. I try to keep internal meetings to as few as possible. Being a virtual organisation, its important to get together with the whole team every couple of months but we all speak almost daily and work together on various pitches.’