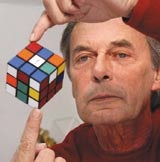 Back in the 1980s, the Diary was going through a pretentious Filofax-and-red-braces phase and secretly envying the gifted few who could conquer the Sudoku of its day, the Rubik’s Cube.

So anyone who was cubically challenged could do worse than visit Hamleys on Tuesday July 26 at 12 noon, where a celebration of the Rubik’s Cube’s 25th birthday is being held. The UK Speedcubing Champion will be there. He can “do” a Rubik’s Cube in less than 20 seconds, apparently. And that’s without resorting to the “unpeeling-the-stickers” method favoured by the Diary.