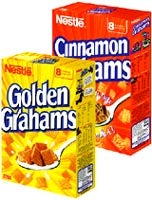 Golden Grahams, the cereal produced by Nestlé and General Mills joint venture Cereal Partners, is to be relaunched with a new tongue-in-cheek image.

The cereal, which comes in honey and cinnamon flavours and can be eaten with or without milk, is being aimed at a more youthful market.

The “Followers of Grahams” concept, which pitches Golden Grahams as a cult breakfast brand, will shortly appear on cereal packets.

Created by promotions and design agency Exposure, the concept was launched at the V2000 music festival in a Followers of Grahams promotional tent.

Sample packets of the cereal were given away, featuring an on-pack “five steps to true fulfilment” guide.

Design agency RPE has also worked with Exposure. The relaunch is initially being backed with a radio and postcard campaign.

McCann-Erickson currently creates TV ads for the Golden Grahams brand and the new concept could be incorporated in future work.

“Followers of Grahams will appear on cereal boxes and will help enhance the experience of the brand for a more youthful market.”