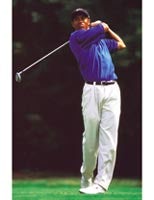 Golf, the preserve of wealthy middle-aged men, has caught the eye of utilities, financial services and breakdown company Centrica, which sees the sport as a suitable platform for selling its services.

The Centrica-owned Automobile Association (AA) has teamed up with the English Golf Union, the governing body for male amateur golf, to launch a scheme called Golf England (GE). The scheme provides clubs and golfers with a broad range of golf-related benefits, and will also enable Centrica to sell financial products to golfers (MW last week).

The sport has boomed in the past decade, with the number of golf club members rising by 48 per cent since 1990 to 1.2 million, according to Mintel. This provides a pool of affluent potential customers for the likes of Centrica.

GE, which will operate a reserve tee-time booking system, linking golfers to member golf clubs, is in negotiations with other commercial partners to provide exclusive offers to members.

One of the first products to be offered through the scheme – set up in conjunction with technology company Advanced Wave – will be a GE/AA dual-branded credit card, which doubles as a smart card allowing users to keep electronic logs of their scores and handicaps. Every GE credit card holder will earn reward points when they spend with the card, which they will be able exchange against the cost of golf-related items such as rounds at participating courses, merchandise and club membership.

Golf clubs joining the scheme will receive a payment for each member that signs up to the card. Non-golf club members can also subscribe to the card, for a £40 fee.

The scheme offers Centrica a chance to bolster its presence in the credit card market and the opportunity to sell its insurance and loan products, possibly through a magazine distributed through the clubs.

But, says Golf Research Group managing director Colin Hegarty: “Supply in this country has increased dramatically. That’s the good news. The news which is not good is that the number of players [members and non-members] has not increased in the past ten years. The needle’s been stuck on 3 million. Player numbers increased dramatically in the Eighties, but then stopped.”

Nevertheless, the game is generating a huge amount of revenue. A survey undertaken by Mintel in June puts the value of the market at £4bn a year, with membership subscriptions and casual play accounting for over a quarter of this. Mintel says the golf goods market is worth £396m, making it the largest sports goods market in the UK.

The core market for golf in the UK continues to be men in their thirties and forties, who are in well-paid full-time employment. However, Mintel found a growing interest in golf among younger adults, with 12 per cent of 15to 19-year-olds claiming to be occasional players, compared to eight per cent of 35to 44-year-olds. It is widely thought that this trend has been fuelled by Tiger Woods’ explosion into the sport in the late Nineties, and many hope his arrival could push the game’s popularity to new heights in the same way that the success of players such as Seve Ballesteros and Nick Faldo did in the late Eighties.

Paul Holland, a director at Octagon Ireland, is responsible for building the sports marketing agency’s business on the European golf scene. Golf, he says, is a key sport for Octagon and he claims interest from sponsors is buoyant and will increase.

Among televised sports, golf ranks second only to football in terms of the total number of hours screened during 2000, accounting for 10.7 per cent of sporting hours shown, with 92.2 per cent of this on Sky, according to Mintel. As an active participation sport it fares well – for every 2.3 people who watch golf on TV, one person actually plays.

Holland says the nature of the game – in terms of its length and pace – also lends itself to forging business partnerships, and says the profile of the typical player is an added bonus for sponsors.

M&C Saatchi Sponsorship managing director Matthew Patten agrees: “Golf has always being identified by the corporate sector as the natural place to be. The decision-makers tend to be golfers – it’s the sport of business.”

Whether many deals are struck on the fairway is debatable, but Patten says being able to play is a useful skill to have. “I know captains of industry who are learning because they feel they need to be able to go on the golf course with business partners.”

Patten says that both the professional and the amateur games are in “rude health”, pointing to the fact that “young urban professionals” have started to take an interest.

But Hegarty is fearful for the future of the amateur game and insists that the sport cannot rest on its laurels. He advocates a national marketing campaign to get more women and younger people involved, referring to the fact that only seven per cent of UK golfers are women, the lowest participation level in Europe.

“Tiger Woods is probably the greatest sporting icon today. That is having a huge effect on TV audiences, but it is not being translated into more people playing,” he says.

Hegarty says his organisation’s research shows that 7 million people want to play golf, yet only 3 million do so, the rest being put off by the expense and physical and social inaccessibility.

Golf offers the opportunity for companies like Centrica to target a pool of affluent AB males who are particularly focused on the sport, through club-based loyalty schemes, sponsorship and advertising. But in order to maintain its following the sport will have to open its doors to a wider market by lowering membership fees and creating a more accessible environment.

With budgets tight and confidence low, many companies are looking again at Christmas incentives for staff. From diaries to vouchers, the big question is how to give staff morale a much-needed boost without emptying the corporate piggy bank

ITV Digital’s Monkey is becoming something of a celebrity. In a case of life imitating art, he is this week being interviewed by national magazines. “He’s become high profile,” says a spokesman for the Monkey, which was created by ad agency Mother. “Journalists can ask him anything they want. He can even do CD reviews […]

Allied Domecq has poached Britvic director of brand marketing Cathryn Sleight to be its UK marketing chief. She replaces Grahame Cox, who five months ago was promoted to the new role of director of innovation and business development. Since then, the top UK marketing post has been held on an interim basis by Richard Hayes, […]