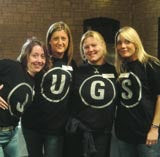 There are so many depressing angles to this story that the Diary has spent the past half-hour underneath a desk, weeping gently between swigs from a bottle of fortified British wine. However, duty calls, so here goes.

Staff from Golley Slater recently took place in a team-building exercise (depressing fact No.1). Each was put in a team and given a T-shirt with a letter of the alphabet on it. In a surprising show of initiative, the clever marketers realised they could line themselves up to make words. However, rather than standing by a window and spelling out “For God’s sake get us out of here”, they chose to fawn upon their boss, Basil Kelly, by making his name (depressing fact No.2).

In a quote that in a stroke makes drowning seem an inviting death, Kelly says of the moment: “I was touched. I saw my name heading towards me. It was Grrreattttt [sic] team building.” Unless Kelly has been moonlighting as Tony the Tiger, that constitutes depressing fact No.3.

Finally, and perhaps most crushingly (No.4 coming up…), staff decided to give their creativity free rein, improvising with the objects to hand. Yes, they lined up to spell out “jugs”.

Which is apt: they look a proper set of twits.