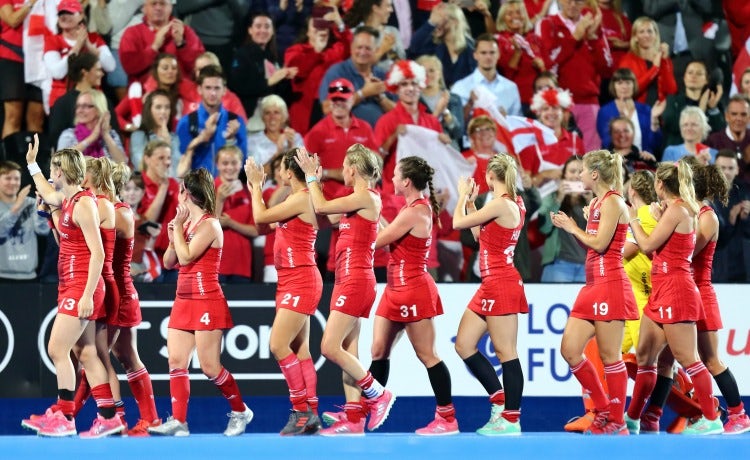 This has been a fantastic year for women’s sport. The SSE Women’s FA Cup Final in May attracted a record crowd of 45,423, with 10,000 more fans attending than in 2017. Meanwhile in the summer England Hockey received 120,000 applications for tickets to attend the Women’s Hockey World Cup in London, with England matches oversubscribed by 40,000.

Success on the field is attracting new audiences and fresh brand interest. Data released by the Women’s Sport Trust (WST) in August, in partnership with Nielsen Sports and England Hockey, found that 59% of the UK population are interested in at least one women’s sport. Of this number 51% are female and 49% male, representing a relatively gender-balanced fanbase.

At the same time brands are closing the sponsorship gap between men’s and women’s sport. The number of women’s sport sponsorship deals increased by 47% between 2013 and 2017, with the average deal size rising by 38%, according to Nielsen.

The broadcasters are catching onto the opportunity, which is important given that 42% of the UK say they would watch more women’s sport if it were accessible on free TV and 37% if it were free online.

The BBC has committed to streaming 1,000 extra hours of live sport online every year, including live Women’s Super League (WSL) football for the first time. Elsewhere BT Sport signed a four-year deal with the International Hockey Federation (FIH) to broadcast all major World Cup and Pro League matches, and Sky Sports teamed up with the WST on ‘#ShowUp’, a campaign encouraging Britain to support women’s sport by watching, attending or playing. 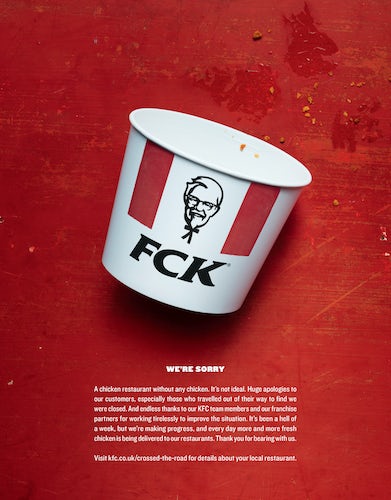 It’s no secret that print media has been on a downward spiral as consumers and advertisers continue to switch their allegiance to digital. In fact, the time consumers spend reading printed newspapers has fallen 45% since 2011, according to a report by media agency Zenith and ad spend for national news brands dropped 4.2% during the first half of 2018 compared to the same period last year.

So it was good to see a positive print story emerge in 2018, as newspapers were the medium of choice for a host of brands that wanted a trusted and respected platform to make a heartfelt apology.

Back in February, Oxfam took out a full-page ad in a number of national newspapers to apologise to its supporters following allegations of sexual misconduct by its staff in the aftermath of the Haiti earthquake. Notably, the ad appeared in The Times, the very paper that exposed the scandal in the first place, an immediate response to the backlash as it looked to win back trust.

Just a week later, KFC took a similar approach – albeit for a very different type of crisis – when it ran out of chicken and was forced to close hundreds of its restaurants temporarily. In what is now one of the most memorable and lauded campaigns of 2018, the fast-food chain rearranged its initials to say ‘FCK. We’re sorry’ in a full-page ad that ran in both The Sun and the Metro.

Perhaps most pointed, though, was digital giant Facebook’s decision to apologise to the masses for the Cambridge Analytica scandal, not solely via its own channels, but by taking out full-page ads in the UK’s biggest newspapers. Via a long-form letter, CEO Mark Zuckerberg said: “We have a responsibility to protect your information. If we can’t, we don’t deserve it.”

All these ads show the authority print still holds. While there are many naysayers and talk of the death of print continues, there are still plenty of times when it makes most sense to pick newspapers and magazines for advertising. A study by Radiocentre and Ebiquity on the best-performing channels shows that newspapers are actually the third most effective channel (behind TV and radio) when measured across 12 attributes, including salience, ROI and emotional response, which is at completely at odds with advertisers’ perceptions.

In times of crisis newspapers come back into their own, heralded as a trusted source that adds weight to an apology. While other channels might be better at reaching the masses or finely targeted audiences, print still has the gravitas many marketers need when something goes wrong. LT 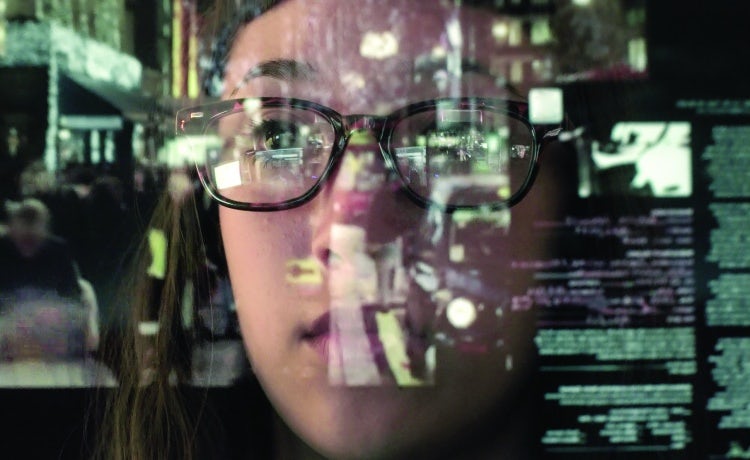 We knew this year would be a big one for data rights even before it began. Since the General Data Protection Regulation (GDPR) finally passed through the EU parliament in 2016, 25 May 2018 had been set in stone as the start of a new era when consumers would supposedly gain the upper hand over brands in the collection and processing of their personal data.

Without doubt, GDPR has focused marketers’ minds and provided a new set of standards, but in fact the year’s biggest data story related to a historic breach from 2014 – Cambridge Analytica’s acquisition and use of Facebook users’ data to create segmentation models, on which it built a political consultancy that helped Donald Trump win the 2016 US presidential election.

Cambridge Analytica went out of business amid the scandal, while Facebook received the maximum fine from the UK Information Commissioner’s Office (ICO) under the Data Protection Act for failing to prevent it. Since it occurred before GDPR came into force, this amounted to just £500,000 rather than the 4% of global turnover it could otherwise have been. Facebook is now appealing.

Meanwhile, AggregateIQ (AIQ) was the first company to receive notice from the ICO that it had violated the new regulation. The Canadian company, alleged to have links to Cambridge Analytica, which it denies, offered data-driven advertising services to Vote Leave in the 2016 Brexit referendum. The ICO says AIQ is co-operating but failure to do so could lead to a fine of up to £17m.

These companies’ activities are hardly business as usual for most brands, so we’ll most likely have to wait until 2019 for further judgements that clarify how careful marketers must be. Data and ad tech firms have been targeted by complaints from campaigners, while the ICO has told companies such as Experian, Acxiom and Equifax they must conduct data audits.

Marketers’ outlook must now be ‘privacy by default’, and brands must be transparent and explicit about both informing customers how data will be used and adhering to their preferences. The most forward-thinking companies see it as an opportunity not only to improve their data quality and approach direct communications in a more human way, but also to build innovative, premium data-driven services based on watertight consent.

That can only be good news for consumers – and the relationship of trust on which their relationship with brands must be built in the digital age. MB

This year has been stellar for fast fashion retailers. The likes of Asos, Boohoo and Missguided are all seeing record sales growth, fuelled by their ability to serve the needs of increasingly demanding consumers much more quickly and cheaply than high street retailers, many of which are still struggling with the shift to ecommerce.

Asos’s 18.4 million active customers helped retail sales grow by 26%, while Boohoo saw sales soar by 228% and profit increase by 40%. Meanwhile, Missguided, which sponsored the latest series of Love Island on ITV in the summer, saw sales of its clothes go up by 40% every evening the hit reality show aired.

The slick customer experience that fast fashion retailers provide is appealing to people living in a ‘buy now, wear now’ world. They can create new, on-trend designs and have them ready to ship to customers at low prices within just a couple of weeks. As a result, Britons are now buying twice as many clothes as a decade ago, more than any other country in Europe.

Yet the cost of this is not just the detrimental effect on bricks-and-mortar retailers; the environment is suffering too. Atmospheric carbon dioxide levels are rocketing, the water footprint of clothing in use is growing, and hundreds of thousands of tonnes of clothes end up in household residual waste every year.

Fast fashion is booming now – that is a fact that cannot be denied – but as consumers wake up to the impact it is having on the wider world, a different story may be told over the coming years. EH

A year for big brand buyouts 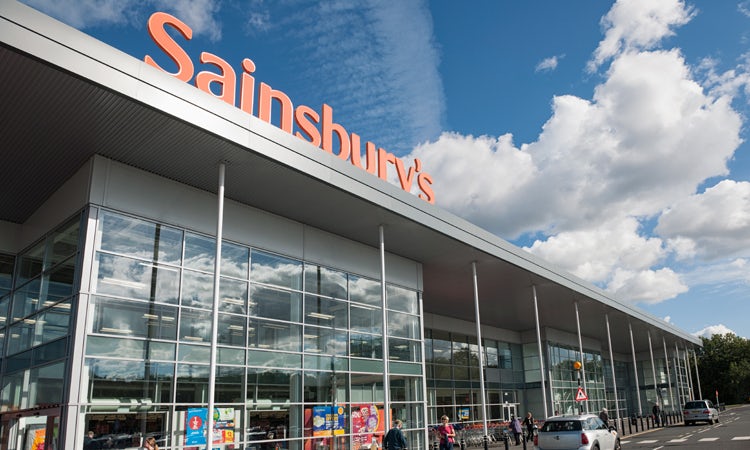 It’s been a busy year for consolidation and big buy-outs, with mergers reaching a record $2.5tn (£1.9tn) in the first half of the year alone.

Some have been necessary moves to fend off competition, others to save entire businesses from going under. And some have been aimed squarely at increasing market strength.

The UK grocery sector has had a particularly eventful year, which this year saw Tesco complete its £4bn takeover of wholesaler Booker and Sainsbury’s and Asda announce plans to merge their businesses.

Tesco’s acquisition gives it access to a wholesale market that is growing at a much faster rate than retail, while the ‘Asbury’s’ merger will – if approved by the competition regulator – create a new supermarket leader in the UK.

Elsewhere in the UK, Sports Direct has been throwing cash all over the place, buying dying department store chain House of Fraser for £90m and Evans Cycles as part of a pre-pack administration. Unfortunately that has resulted in a large number of job losses and store closures.

And US cable giant Comcast will extend its media empire into the UK following the takeover of Sky, after blowing Rupert Murdoch’s 21st Century Fox out of the water with a £30bn bid in September’s auction.

Others have been making strategic deals to expand into other markets too: Coca-Cola bought Costa Coffee and Pepsi bought Soda Stream, for example. Meanwhile, Michael Kors, which bought Jimmy Choo last year, added Italian fashion house Versace to its growing portfolio, while Wagamama was sold to the parent company of Frankie & Benny’s.

Now, Uber is in talks to buy Deliveroo – one of the main rivals to its own food delivery service Uber Eats – however, Deliveroo is said to be determined to keep its independence.

As technology evolves and consumer behaviours with it, businesses are having to think much more strategically to keep up with the pace of change. We should expect to see these sorts of deals continue well into 2019 and beyond, creating fresh challenges for the marketers tasked with managing these new brand portfolios. EH 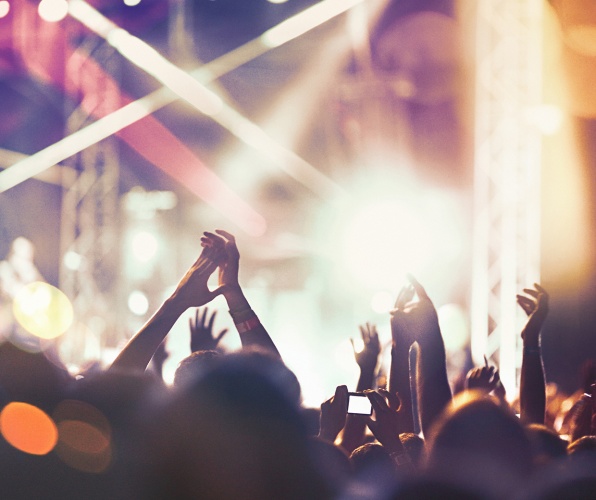 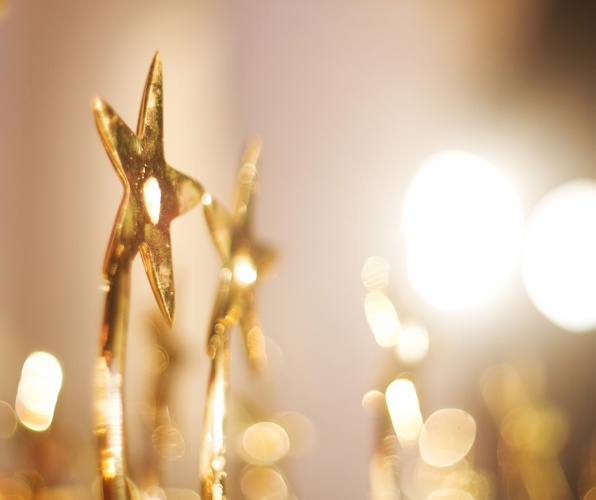 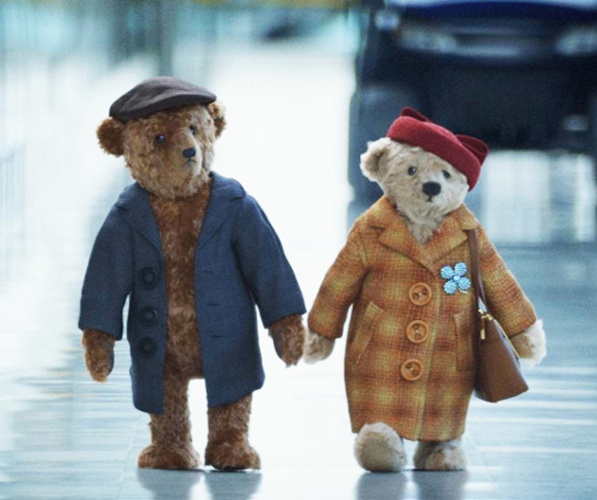 Is this the worst Christmas ad season on record? Data reveals that less than half the number of ads compared with last year have scored three stars or more – with John Lewis just scraping into the top 10.