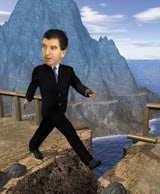 Niall FitzGerald, whose influence as head of Unilever has irrevocably changed how consumer goods are marketed from Brazil to Bangalore, caused many to raise their eyebrows last week by stepping down from the global packaged goods leviathan three months earlier than expected.

His retirement after 37 years at Unilever – and 18 as a board director – also comes before his five-year Path to Growth (PtG) master plan is due to expire in December.

But Unilever has been hit by a succession of negative headlines after failing to hit sales targets for its leading brands at every quarterly results announcement since July last year. This culminated last week in the publication of Unilever’s full-year results for 2003 showing that sales of its leading brands, which account for 93 per cent of its business, grew by only 2.5 per cent, some way off the five to six per cent target set out in FitzGerald’s PtG strategy.

Food director Patrick Cescau, who succeeds FitzGerald as chairman in September, will oversee the company’s new replacement strategy, Unilever 2010, which has at its core the word “vitality”.

FitzGerald is damning of Unilever’s performance last year, saying: “We are obviously disappointed with it.” Sales were hit by what FitzGerald describes as a “lacklustre” performance of its food division – slow to respond with its Slim-Fast brand to the popularity of low- carbohydrate diets – as well as trouble at its Prestige Fragrance business, which includes brands such as Calvin Klein and Cerruti.

The company also highlighted household care – weighed down by disappointing sales of Cif and Domestos – and frozen foods as areas that need swift “remedial” action.

David Lang, analyst at investment bank Investec, describes the results as resembling a “curate’s egg”. He says: “Some businesses have been struggling for more than a year, and the last quarter was the worst. Sales underachieved, but Unilever managed to get past the finishing line for earnings.”

Another analyst adds: “It is only brand growth that failed, but this is a problem given the emphasis placed on the company’s 400 leading brands.”

He points to last week’s results from rival household company Reckitt Benckiser, which posted a 21 per cent growth in pre-tax profit in 2003, and says Unilever has struggled to match Reckitt Benckiser in innovation. About 40 per cent of Reckitt Benckiser’s net revenue, which was up eight per cent in 2003, comes from products launched within the past three years.

But FitzGerald is confident that Unilever’s weak areas will be fixed for the conclusion of the PtG at the end of 2004. He admits innovation will be key to restoring fortunes in household care, Slim-Fast and frozen foods.

FitzGerald rejects suggestions that either its fragrance or household care businesses could be sold under current plans. “For the moment, we believe our businesses can be fixed,” he adds.

FitzGerald says that PtG is otherwise exceeding expectations. The company whittled down 1,700 brands to 540 by the end of 2003, nearing its target of 400. Brands sold off include Mentadent, Brut, Shields and Pond’s. Leading brands, which include Dove, Sunsilk and Knorr, account for 93 per cent of sales, with a 95 per cent target to meet.

FitzGerald says the timing of his retirement has nothing to do with a difficult year, but is to aid a seamless handover. He defends his past year in charge: “Judge the totality. Since I’ve been in the role, profits have grown by ten per cent a year compound, margins have doubled and cash flow trebled.”

FitzGerald says he is happy to have his score card marked nine and a quarter out of ten, but analysts still fear his report might be labelled “should do better”, if only in terms of the ambitious goals he set himself.

One analyst says that FitzGerald was “naive in his understanding of how the market views targets”. He says FitzGerald’s PtG target of five per cent sales growth was unrealistic. “FitzGerald thought everyone would say ‘good for them for stretching themselves’ when the City actually used the targets to flagellate them.”

He compares Unilever with Reckitt Benckiser, which sets conservative targets and encourages people to exceed them. “Unilever’s high targets were seen as unattainable, which can damage motivation.” FitzGerald acknowledges that the targets were “getting in the way of running the business”.

Unilever will now no longer give detailed quarterly statements, which is representative of a more considered strategy. The company has also not set sales targets for the 2010 strategy, although has said it “expects” a more conservative sales growth of between three and five per cent.

That expectations can be lowered without protest from analysts is a testament to where FitzGerald has taken the company in his eight years in charge. He has overhauled a business that once epitomised sluggish pan-European bureaucracy to one hungry enough to publicly promise and nearly meet tough targets.

Roy Jeans, managing director for Unilever at its media agency Initiative, says FitzGerald has transformed the company. “Unilever used to feel like a private members’ club, but one that no one wanted to join. In the past five years it has been transformed into a fantastically vibrant company.”

It is difficult to find anyone who dislikes FitzGerald, with one advertising agency acquaintance describing him as “a transparent and straightforward man; ruthless but with a great deal of Irish charm.”

Internally, one analyst says he is regarded with a mixture of loyalty and respect among his senior executives and staff, a considerable achievement for a boss who has made more than 50,000 people redundant.

From money to marketing

FitzGerald is also rightly lauded as one of the top marketing brains of his generation, despite his beginnings as an accountant.

During the past four years, Unilever has spent about t26.8bn (&£18.1bn) on advertising, and last year raised advertising spend by 1.4 per cent to 14.2 per cent of sales. There are no complaints among the company’s agencies – which in the UK includes Lowe, Ogilvy &amp; Mather and Bartle Bogle Hegarty.

Matthew Bull, chief executive of Lowe, says: “Fitzgerald is a marketing man despite his finance background. He has helped focus the company on its brands, and developed core strengths by intensively marketing these brands. You don’t go far in Unilever unless you have a very strong sense of brands and marketing.”

Bull recalls that in the late Nineties, prior to starting work on Unilever business in South Africa, he was warned that it could be the death of his creative career. But, Bull says, the company was transforming at the time under FitzGerald’s leadership into a “creative powerhouse”.

“People said we’d never do a decent bit of work. But FitzGerald turned Unilever’s previously stuffy attitude into one where creativity and energy are paramount.”

FitzGerald’s survival skills are also well documented. He emerged unscathed after masterminding the most embarrassing marketing disaster of the Nineties with the launch of the clothes-eroding Persil Power when he held the position of Unilever detergents director. FitzGerald admits this episode marked the lowest point of his career.

City analysts now say Unilever is in a strong position to meet the challenge of archrival Procter &amp; Gamble (P&G), which has signalled its intent to keep up its challenge with multi-million pound pushes behind its detergents and beauty portfolios.

But there is still work to be done, according to one analyst. He says the company still carries bureaucratic baggage, with rivals such as Reckitt Benckiser and P&G boasting management teams that are leaner and more ruthless.

The analyst adds the PtG has not finished the job of creating a core portfolio of few, strong brands. This will be where Cescau will need to impress.

Like FitzGerald, Cescau has risen through the ranks of Unilever during the past 30 years. Insiders say he has a strong grasp of the importance of brands as head of the Unilever foods business, and as the man who oversaw the acquisition of Bestfoods in 2000.

Cescau’s first task will be to launch the Unilever 2010 marketing strategy next year, which has already been criticised as half- developed and rushed out to coincide with FitzGerald’s premature departure.

The company’s new mission statement is “Vitality”, which carries the slogan “to help people to feel good, look good and get more out of life”. But Unilever is unable to explain what this will mean in practical terms. One company insider admits there was debate whether to unveil the strategy before the details were finalised.

FitzGerald is also less than clear, describing “vitality” as the criteria that “will inform all our choices across our brands” and “guide our emphasis as we go forward”.

One aspect of the plan has been revealed, however. The Unilever name will be stamped prominently on every product and used by every local company appearing either alongside its existing name or replacing it. The aim is to help transfer an umbrella or master brand equity across the company’s portfolio.

Marketing aside, analysts say there is not a great deal of difference in terms of brand development between Unilever 2010 and the PtG. Investec’s Lang says: “The 2010 plan has a similar blueprint in that it will continue to focus on fewer, bigger brands.”

Lang claims even the vitality tag is old: “There was a programme in 2000 that yielded the theme of vitality, and now it is the mission statement for the next five years.”

But, Lang adds, the company does not need to change much to go forward. Lang says the strategy is working, but there is room for further improvement on its core brand development. He points out that Cescau was heavily involved with the original PtG as finance director making him ideal to develop the strategy further.

So for Unilever – and Cescau -the next five years are unlikely to prove as epoch-making as the PtG strategy. Indeed, indications suggest they will continue down a similar brand-building path, albeit dressed with new marketing speak such as “vitality”.

As for FitzGerald, it has been reported that he will become chairman of Reuters, or may take up a role with a non-governmental organisation aimed at improving living conditions in Africa, where he spent many years building Unilever’s business and, in doing so, met his hero Nelson Mandela.

And, of course, FitzGerald refuses to rule out using his retirement to help one of his greatest loves: Manchester United. “You never know,” FitzGerald says, “I could be tempted, but then I’m not likely to be asked.”