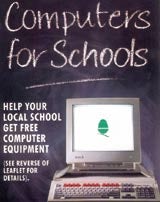 The British public’s obsession with “free” gifts and promotional offers linked to purchases continues unabated. This nation has built up a reputation as the freebie capital of Europe, and the English in particular have become famed for their eager response to sales promotions.

But while people will often buy a product that professes to offer them something for nothing, sales promotions are rarely so successful when they adopt an approach that requires people to be more selfless. Charity tie-ins may make companies feel good and project an image of corporate social responsibility, but they tend not to lead to the same kind of sales uplifts that offering something free can. Appealing to the consumer’s better side does not usually get a big response.

“We are a greedy nation,” says Dave Roscoe, client services director at sales promotion agency GFM Services. “I wonder if it is an English thing, but everybody loves a freebie. Certainly if you’ve got two products, one which has a plastic toy attached and the other which gives 5p to a children’s charity, people will pick the one with the toy. For the masses, the question is: ‘What can I get out of it?'”

Roscoe believes it’s partly because the British are suspicious of charitable tie-ins, often thinking the worst about whether the money will go to the intended cause. This, however, may be a way of excusing their selfish behaviour.

Outside the UK, the story of sales promotions is very different. In Germany, for example, sales promotions are perceived as a grubby form of unfair trade and, as in most European countries, there are tight rules restricting their use.

But in the free-market of the UK, marketers and retailers are following in the footsteps of their US counterparts. Promotions have become an indispensable tool for shifting goods and encouraging people to try out new products and services. The Institute of Sales Promotion estimates that promotions are worth more than £20bn every year in the UK, some two per cent of gross domestic product.

Most people realise that promotions do not really give something for nothing, but just can’t help themselves falling for freebies. Roscoe gives the example of fantasy football promotions his agency has run with The Daily Telegraph newspaper. One year, the paper offered to give 50p out of the £3 entry fee to a children’s charity. “It did absolutely nothing for the numbers,” says Roscoe. The next year the same promotion dropped the charity tie-in and instead offered players a free computer game (which cost the paper 50p) in return for the £3 entry fee. “Entries increased ten per cent,” he says. “It’s about greed, people are looking for value for money,” he adds.

However, it is questionable how appropriate it is to offer money to a children’s charity as a promotion when targeting young men through a football competition. Some believe that it takes a degree of care and subtlety to get people to act for selfless reasons. Sales promotion agencies need to look closely at the public’s motivations in giving to make the most of their beneficence.

Direct marketing agency Target Direct has launched a service that segments people’s motivations when buying products and making charitable donations. Called Target Alchemy, it aims to find the reasons why people are motivated to respond to an offer and then target them according to their motivation.

Target Direct managing director Paul Farthing says: “A person may give to a cancer charity because a parent has died of cancer. But most of us have known someone close who has died of cancer but we don’t all give to that charity. So what is it that drives them to respond by giving?”

Target Direct has tested Alchemy with a charity. The charity arranges contacts between sponsors in Western countries and children in developing nations and sometimes gets them to write letters to each other. Through this work, Target Alchemy has identified clusters of sponsors in the UK that include the “foster parent” type – traditional charity supporters who love writing to children; and the “benefactor” type – who are thirty-something career people for whom letter writing is a burden.

Read between the lines

When allocating children to sponsors, the foster parent type is an obvious match for Filipino children, for example (they tend to be prolific letter writers). By contrast, benefactors are given children who don’t have the tradition of letter writing.

Target says this methodology has helped the donor support teams to increase the charity’s income four-fold in the past three months. The new cluster information has also prompted the charity to look again at its communications with donors. Welcome packs have been redesigned to match the cluster types, and attrition has already been reduced by two per cent.

“We’ve identified criteria that clearly shaped the relationship between the target donors and the organisation. By producing a more sophisticated picture of what motivates each supporter, we were able to translate this into profiles for targeting prospects. Communications were then developed to match the different clusters,” says Farthing. He adds that the motivational method can be used for commercial brands as well as charities.

People can be motivated by charitable feelings and some sales promotion experts believe there can be advantages for brands in playing to consumers’ better instincts and promoting social and ethical causes rather than appealing to pure self-interest.

A growing area in recent years has been cause-related marketing (CRM), where brand owners promise to donate a proportion of their profits from sales to a good cause, be it Tesco handing Computers For Schools vouchers to customers or Flora donating money to the British Heart Foundation.

Some £50.4m was raised for charities and good causes in 2002 through 81 CRM programmes monitored by brand owners’ organisation Business in the Community – a 50 per cent rise on the £33m figure for 2001.

No time for the present

Business in the Community claims CRM has gained great popularity among consumers and it is related to today’s “time poor” society. Consumers say lack of money is a reason not to make more traditional donations, the group says.

“When hectic lifestyles and tight budgets mean consumers have less time and money to support charities and good causes, cause-related marketing programmes give them an alternative way to help,” says Business in the Community director Sue Adkins.

CRM doesn’t require the consumer to do anything – there is no sacrifice on their part, though it may help them feel better about the products that they buy. But there is little evidence of a direct link between brand sales and the existence of a charitable programme. In the case of schemes where brands donate computers and books to schools in return for vouchers, there is a selfish motive – people will often collect the vouchers and donate them to schools attended by their own children.

Capital Incentives &amp; Motivation managing director Graham Povey says the whole point of sales promotions is to offer an incentive for people to change their behaviour. He agrees that selfish motivations are the strongest, though believes certain groups will respond to charitable appeals.

“Sales promotion is about what people will get for doing something. We have offered charitable options for people to donate money to charities and they have had take-up, but it is very much in single figures. This type of promotion only appeals to a certain type of consumer,” he says.

But Povey believes it is difficult to second-guess what kind of reward will motivate people. “The most successful sales promotions are those that offer a choice of rewards,” he says. Since promotions are all about appealing to people’s aspirations, he believes allowing them to choose the reward is important – and that might include offering a charitable option as well.

Povey does not believe that offering a chance to win a prize is a great motivator. “We steer our clients away from prize draws because the public is pretty cynical about them. The chance to win a car may look appealing, but it doesn’t get people switching product. I think small rewards given often are better than a one-off prize,” he says.

The flood of cheap goods into advanced economies from the world’s low-cost production centres and an oversupply of products in many markets is cutting high street prices to the bone. Marketers believe shoppers need to be given a little extra reason to buy their product over a rival’s. But UK consumers are getting so used to receiving what they are told is a free gift that it is becoming harder to sell them anything without some sort of promotion.

This is the inevitable downside to appealing to people’s selfish side. Free gifting can turn into a damaging downward spiral of rival promotions. Even so, this may work out to be more cost-effective than cutting the price of the goods, and it is unlikely that marketers will ditch the idea anytime soon.