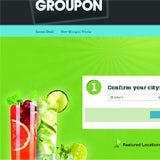 Deals are city-specific offering shoppers up to 70% off local products and experiences including spas, restaurants and sports activities.

The deals become valid when a minimum number of shoppers buy them, which allows Groupon to leverage group discounts and brands to increase their local marketing.

Groupon is said to have 12 million registered users in 140 countries and an estimated annual revenue of $350m.

Social shopping sites using group buying power have emerged during the recession as shoppers get accustomed to using vouchers and searching for cheap deals.