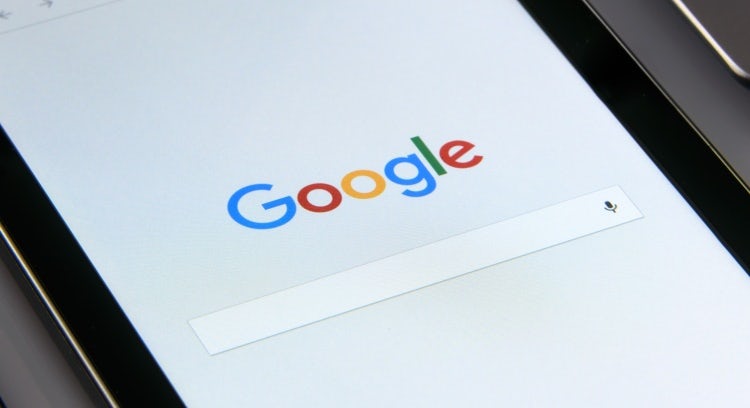 Google could have been forgiven for thinking it had come away relatively unscathed in February after The Times published the initial results of its investigation into ads appearing next to extremist or unsavoury content. A few brands, such as Mercedes-Benz and Marie Curie, pulled advertising for a couple of days but they were soon back claiming the issue had been “fixed”.

But The Times was not done. Just days before Advertising Week Europe (AWE), one of London’s biggest ad industry events, it published the next wave of its investigation showing even more brands caught up in the controversy.

This time Google could not escape the fallout. At last count, according to The Times, more than 250 advertisers had suspended advertising on YouTube, and in some cases its display ad network. The list of brands joining the boycott includes L’Oreal, McDonald’s, Marks & Spencer, HSBC, Verizon, Walmart and General Motors.

The timing could not have been much worse for Google. Its European boss, Matt Brittin, was scheduled to give one of the first talks at AWE. Brittin was forced to spend most of his time on stage addressing the controversy, apologising and promising a review of policies and procedures.

Almost every panel discussion at AWE, even those not directly related, at least touched on the subject. And few defended Google, with most taking the opportunity to point the finger of blame and rebuke the company for not doing enough to tackle the problem.

It has also become an issue beyond ad land. According to YouGov BrandIndex, consumer perceptions of both Google and YouTube have slumped in the wake of all the negative headlines.

Google now sits at the bottom of a list of 43 online companies in terms of ‘buzz’ (a measure of the positive and negative things said about a brand) with a score of -8.7. That figure has fallen by a statistically significant 20.6 points over the past two week.

Perceptions of the Google brand across almost every measure, from quality to value, reputation to recommendation, have all dropped. Unsurprisingly, its ‘index’ score, which reflects all these measures, is down 11.4 points over the past week to 28.7.

The YouTube brand has also been hit although the declines are less pronounced. Over the past week its index score fell 3.8 points to 29.3, suggesting Google is bearing the brunt of the backlash.

Advertisers pulling spend is also impacting its revenues. Nomura Instinet estimates that Google could lose $750m (£597m) in revenue this year, based on a 7.5% hit to its $10bn YouTube business. And that doesn’t include the costs of rectifying the problem.

The study suggests the advertising boycott would hit YouTube hardest in the second and third quarter of this year, with the video platform earning $295m (£235m) less than the planned $2.46bn (£1.96bn) during each period.

This is only a tiny proportion of Google’s overall revenue, however, which in Q4 2016 alone was around $26bn (£20.7bn). Google makes a large chunk of its annual revenue through search, which is unaffected by the boycott.

The company’s share price would suggest shareholders are worried as well. Google’s shares hit a monthly high of $872.37 on March 17 but fell to a one-month low of $835.14 yesterday (28 March), a decline of 4.3%. And Pivotal Research analyst Brian Weiser has downgraded its stock given concerns over the boycott spreading.

There has also clearly been a hit to Google’s relationship with the ad industry, on which it relies for nearly all its revenues. That is harder to measure, but the lack of support from almost any part of the ecosystem suggests there is a fundamental trust issue.

Agencies seem to see the boycott as an excuse to get a discount on premium advertising, according to comments made by GroupM’s digital director Rob Norman to the Financial Times. Meanwhile, publishers have unsurprisingly been merrily turning the screw, talking up their premium environments and brand-safe content.

Marketers, rather than working with Google, have distanced themselves from the site and are using it as a means to demand more transparency from digital generally. Speaking at AWE, RBS CMO David Wheldon said: “Digital seems to equate to not being transparent. RBS has to be completely transparent. We can’t charge [our customers] unnecessarily and we need to be held to account for our actions on a daily basis.

“It’s about time other parts of the advertising ecosystem were held to account in the same fashion.”

There is an air of opportunism, particularly from publishers. The Guardian and Channel 4 were two of the first brands to suspend advertising yet also have potentially the most to gain from advertisers’ growing distrust of Google if it means marketers start looking for other places to spend their money (although this could just as easily offer an opportunity for their other main rival, Facebook).

It is also important to remember that brand safety is not a new issue. Awkward associations between advertising and the content it appears next to happen both online and offline. Even the link with unsavoury or extremist content should not come as a surprise to marketers. A similar investigation by The Sun in 2013 found that ads were appearing next to pornography, while a report last year by the Financial Times found that a jihadi website was selling ad space on its website using a service provided by Google.

READ MORE: Brand safety online – can it ever be guaranteed?

It is almost possible to stop this happening entirely. Buying advertising online does not involve talking directly with a publisher and placing ads in particular places. Instead it uses programmatic technology to buy access to an audience online, targeted either by demographics or behaviour.

The basic idea of ‘you get what you pay for’ in programmatic video advertising is something we believe many advertisers have yet to fully incorporate into their media buying strategy.

This gives advertisers reach and scale without the associated cost of manually buying all those placements. But what it doesn’t give is context. With so much content being uploaded and new websites created every minute it is almost impossible to be 100% sure ads are appearing next to brand-safe content.

There are steps brands can take. They can blacklist certain sites they don’t want their content to appear on or whitelist so their ads only appear on certain sites. Plus there are verification tools that can be used to ensure best practice. Marketers are encouraged to use standards set up by the Digital Trading Standards Group and ensure their agency and ad tech partners are doing the same.

Google is also taking steps to mitigate the issue. Harris, in his talk at AWE, promised Google would hire more people to police content, make its tools easier to use and update policies.

Yet it needs the industry to work together as well. Harris told Marketing Week in an interview before the latest The Times investigation that it wants to drive a “global discussion” around what good ads and brand-safe content look like.

“It’s not down to just one company to set the agenda or set the standards – it’s got to be a collection across media owners, creative and media agencies, and importantly the advertisers themselves, as to what they want to see,” he explained.

There also needs to be a change in mindset from advertisers, who all too often see digital and programmatic buying as a means to cut costs.

Google already offers a premium service, ‘Google Preferred’, that allows advertisers to pay more to have their ads run alongside the most popular videos. According to a report by Enders Analysis, this has a much higher guarantee of brand safety, but also costs more. Because most advertisers want cheap reach they buy via exchanges that have a much lower guarantee of brand safety. 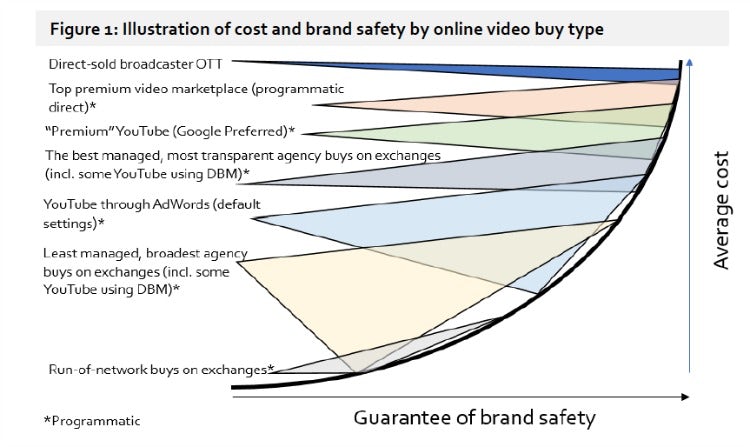 Matti Littunen, senior research analyst at Enders, says while the above is “illustrative” is hows the hierarchy of online video purchase channels when it comes to cost and exposure to brand risk. He explains: “The basic idea of ‘you get what you pay for’ in programmatic video advertising, either in media costs or agency planning and service fees (or both, depending on the type of media), is something we believe that many advertisers have yet to fully incorporate into their strategy for media buying.”

READ MORE: Ad safety revelations should be a wake-up call for brands, not just Google

Unilever’s marketing chief Keith Weed agrees brands need to stop seeing programmatic as a race to the bottom on price and instead work to reduce ad fraud and ensure brand safety.

“From a brand owner, marketer or advertiser perspective we need to smarten up as well. I’m every bit for holding Google, Facebook or Twitter accountable, but we also need to hold ourselves accountable for using the tools that are at our disposal,” he said, speaking at AWE.

In the end, making the digital ad ecosystem brand-safe is a job for every player – publishers, ad tech, agencies and marketers – not just Google. As ISBA’s Mark Finney puts it: “There are lots of missiles flying Google’s way but it’s not just Google. Every player from ad tech to the agencies needs to work out more robust processes.”

And if the ad industry cannot the Government will. 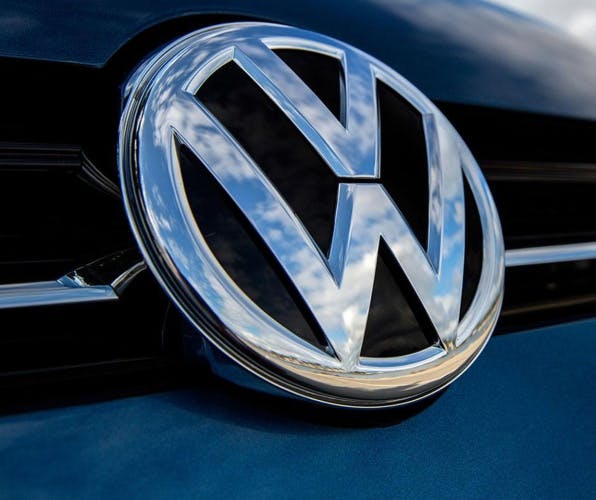 Marketing experts speaking at Ad Week Europe agree the industry must “sort out its emissions” as they compared Google to Volkswagen.

Google EMEA president Matt Brittin has committed to improving control and enforcement after ads were found next to extremist content on YouTube, but Unilever’s marketing boss says brands must also take responsibility.

While Google must do more to police the content published on its site, the ad safety issue should also usher in a new era that sees marketers ask more questions about digital.