The technology company opened its first ‘Google’ branded store in a Currys PC World, in Central London on Wednesday (11 March). Two more stores will follow later in the year, again within a Currys PC World in Fulham and Thurrock.

When asked if Google’s recent retail venture will be a permanent one, a Google spokesperson told Marketing Week that the stores will be open for ‘as long as customers find it useful’.

Google has highlighted that its decision to move its range of devices to a physical store is an effort to get consumers interacting with its Android smartphones, laptops and tablets.

Google’s director of consumer marketing, James Elias says: “With Google shop, we want to offer people a place where they can play, experiment and learn about all of what Google has to offer.

“We think it’s a genuinely unique try-before-you-buy experience,” he adds.

However, the permanence of the stores is up for debate. Google previously opened stores for a range of its Chrome devices, named the ‘Chrome Zone’, which are open across Currys PC World stores around the UK.

Jez Frampton, CEO at Interbrand, told Marketing Week that Google’s choice to use its own name instead of something like ‘Android store’ or ‘Chrome store’ may hint at a commitment to providing a physical presence for customers in the long term.

“The name of the store is a big clue in the brand strategy, and it seems like it’s something that will be more long-term this time around.

“With its range of Android devices, Google has quite a significant product offering and like most others the brand has realised that a physical presence to consumers can be powerful,” adds Frampton.

Google’s move to host its devices within a physical store where people can experience its product sees the company fall in line with digital brands that are looking to make a physical presence such as Amazon and Ebay.

Brands are learning that in order to sell digital devices, consumers need to be able to try them. Research by Fizz, an experiential agency, recently reported that a survey of 2,000 people showed 41% of respondents would feel more inclined to buy wearables if they could touch them or try them on first.

Darryl Adie, managing director of ecommerce agency Ampersand says: “[Google’s] move might be partly driven by the relatively unsuccessful launch of Google Glass, as it demonstrates an underlying recognition of the need to create desire amongst consumers for new, innovative products.”

Google’s choice to present its first store within a Currys PC World, instead of a stand alone retailer like Apple has led some to conclude that it may only temporarily present its devices in this way. Many retailers that opt to present their products as a ‘shop within a shop’ have a short longevity.

Frampton told Marketing Week that the move may be a part of a ‘test and learn’ process for the brand as they look to create a retail presence.

“It’s surprising that Google decided to open its shop within another brand as it has such a vast amount of resources. It comes in second place on Interbrand’s global brand index and spends a vast amount on its search services.

“The Google shop opening was a relatively low investment when compared to what the company is investing in search,” he adds. 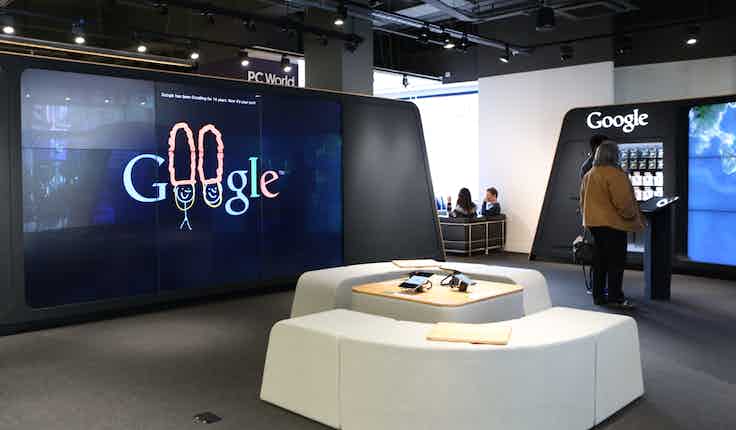 Google opened its first physical store today (11 March) which will host all of the brand’s devices, as it looks to compete with rivals Microsoft and Apple.