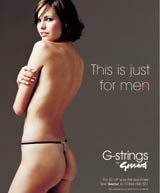 Gossard, the Sara Lee-owned lingerie brand, is reviewing its advertising account for the third time since 2001. Incumbent WARL Change Behaviour is pitching against two undisclosed agencies for the &£5m account.

The pitch is the first to be overseen by marketing director Stephen Holbrook. Holbrook took over from Shaeren McKenzie, who left the company last July with no job to go to (MW July 31, 2003). He joined from sister Sara Lee company Playtex.

Holbrook has carried out a major review of the business and its marketing strategy since the summer. He has already moved media planning and buying from PHD to Media Planning Group and is reviewing the celebrities who are used to endorse its products. They include Anna Kournikova, who is the face of sports underwear range Shock Absorber.

Gossard is to launch a new lingerie range in the autumn. Infinito, a full range of bras and briefs, has been developed using new technology to make it lighter and seamless so it is invisible under clothes. It will be Gossard’s key focus for the autumn.

Trade exhibitions have often been labelled a waste of money, but if they embrace modern technology and learn from their mistakes, they will remain a valuable marketing tool, says Helen Donald

The first lower fat doughnut will be on sale next week after four years’ development. Manufacturer Demon Donuts claims the product is significantly lower in fat than normal doughnuts because it is baked rather than deep fried. The company, based in north London, has patented a method of oven cooking the doughnuts using a yeast […]