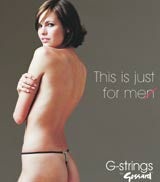 Sara Lee Intimates UK, which owns both brands but runs them as separate divisions, is now seeking a replacement for Holbrook at Playtex. His move comes just weeks after chief executive John Dixey left the company to pursue other interests following the integration of Sara Lee in the UK with the Scandinavian business (MW July 10).

McKenzie joined Gossard in October 2001 from retail group Arcadia, where she was head of marketing for womenswear brands. She made her mark on Gossard as soon as she arrived by sacking incumbent agency Partners BDDH within weeks and appointing TBWA/London (MW October 25, 2001). In July 2002, TBWA and Gossard parted company citing creative differences (MW July 4, 2002) and WARL was appointed by the August (MW August 22, 2002).

McKenzie worked to develop lingerie advertising that appealed to women rather than men, with the “Altogether” campaign, promoting its range of matching underwear and sub-brand G-Strings by Gossard.

Holbrook, who has been with Playtex since 1993 in a range of sales and marketing roles, will oversee the Gossard, Berlei and Shock Absorber brands.