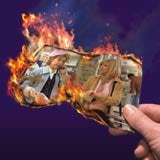 One by one, great branding campaigns that have rolled on year after year have been falling by the wayside. The latest casualty appears to be Tesco’s decade-long “Dotty” campaign, featuring a hapless pensioner played by Prunella Scales.

There are a few long-term branding campaigns yet to run out of steam – such as those from Asda, Scottish Widows, Stella Artois and Walkers Crisps – but many others have been extinguished. At the same time, it seems that ever fewer campaigns are created with longevity and durability in mind.

One of the main reasons for this lack of new long-term brand campaigns is media fragmentation. Advertising campaigns such as the Smash Martians, Heineken’s “Refreshes the parts…”, and “Bet he drinks Carling Black Label”, were all launched in very different circumstances to those of today.

Until Channel 4 was launched in 1982, ITV was the UK’s only commercial television channel. Now there are more than 200. Mass TV audiences are harder to find. In order to reach them, companies are being forced to spend more money, or to find other means of attracting customers to their brand, such as supermarket displays or celebrity endorsement.

“When Smash was launched with the Martian campaign in the Seventies, it was backed with a &£4m media spend,” says McCann Erickson Europe chairman Rupert Howell. “If Cadbury had wanted to achieve the same coverage in today’s media landscape, it would have to spend about &£50m. No one can afford that kind of money.”

In comparison, last year’s most memorable product launch was The Number, which spent &£17.2m on above-the-line advertising to support its 118 118 directory enquiries service. Ambient media and a clever PR strategy were used to amplify the effect of the above-the-line spend.

Some say the high churn rate of marketing directors is also to blame for the decline in the use of long-term brand campaigns. Delaney Lund Knox Warren chairman Greg Delaney says: “The average tenure of a marketing director is 18 months. Some marketing directors come in and desperately need to make an impression, so the first thing they do is review the advertising and change it.”

Haystack Group managing partner Suki Thompson gives some weight to this theory when she says: “Reviews are much more prevalent these days. Marketing directors see a review as a part of their job when they arrive.” In the past, she says, a long-term brand campaign was one that ran for more than ten years, but now those that last for just “two, three, four or five years” claim the accolade.

But it is not just the high rate of turnover of marketing directors that is to blame for the decline in long-term campaigns. After all, Stella Artois has run its “reassuringly expensive” campaign, created by Lowe, for years, yet marketing directors in the beer category have moved with as much frequency as any other sector.

In any case, the decision to introduce a new campaign is nowadays often taken much higher up than the marketing director. “You have to sell it to the chief executive and chairman,” says Delaney, whose agency created the current all-singing all-dancing campaign for Halifax. “When we sold the Halifax campaign, it was really important that Halifax chief executive Andy Hornby bought into it.”

Many chief executives do hold the strings to the advertising campaign. When Sir Peter Davis returned to Sainsbury’s as chief executive, he moved the supermarket’s advertising account out of M&C Saatchi and back to Abbott Mead Vickers.BDDO, after he was sold the Jamie Oliver campaign by the agency. The campaign is now in its fourth year, and contrary to continual speculation, the supermarket’s new chief executive Justin King has not yet taken a decision to axe it: he has even renewed Oliver’s contract for another year. However, Davis’s departure as chairman could spark a review and Oliver could be consigned to advertising history.

Newspaper reports have claimed that although Tesco’s marketing department and its advertising agency, Lowe, are ready to say goodbye to the Dotty campaign, Tesco chief executive Sir Terry Leahy is reluctant to ditch it, because the campaign is said to have boosted staff morale, positively affected the supermarket’s share price and won various industry effectiveness awards.

A Tesco spokeswoman refuses to confirm that Dotty is to be axed: “There are no plans in place, but that is not to say we are not looking at other things.”

The Dotty campaign has been so successful that there is even speculation that a way will be left open for the character to return if any new campaign fails to attract shoppers to the store.

Consumers can be constant

Some industry experts claim that the advertising industry does not always know its audience. Agency Assessments’ partner Stuart Pocock says: “There is a sense in advertising that consumers have the attention span of a gnat. But older audiences are certainly up for commercials, such as the Dotty campaign, which entertain.”

Delaney also believes that advertisers tend to get fed up with campaigns more quickly than the general public. “They have the opportunity to see a campaign about 300 times more often than their customers. They are bound to want to change things,” he says.

There is great pressure on marketers to make a quick impact with their ads. Pocock says: “There is a lack of patience. It took three or four ads before people got the ‘I bet he drinks Carling Black Label’ campaign. You can’t do that now. People want a solution quickly.”

But the decision to dump a long-term campaign is not easily taken. Almost everyone points to a Heineken campaign, which ran over two decades with the strapline: “Refreshes the parts other beers cannot reach”. It was Jim Derkach, now chief executive of Pizza Hut, who finally took the decision to axe the 24-year-old campaign when he was marketing director at the Whitbread Beer Company.

“It was a very hard thing to do,” he says. “At the time, we were under pressure from the growth of premium lagers and we were getting complacent about the brand.” After two years of deliberating, he authorised a change – to “How Refreshing. How Heineken.” Derkach stands by his decision and says: “It was clearly the right thing to do at the time, and it reinvigorated the brand.”

Derkach’s changes to the advertising were ditched last year after Heineken’s Dutch parent company took control of the brand’s distribution in the UK. The product’s alcohol content has been increased so that it can compete more effectively with premium brands such as Stella, and the advertising account has been moved to Clemmow Hornby Inge.

Not every campaign will get the chance of a run as long as Heineken’s, even if the management is behind it. The tobacco advertising ban put paid to many long-term campaigns. “It is my absolute belief that if Hamlet was still allowed to advertise, the ‘Happiness is…’ campaign would still be running,” says Pocock.

And further tightening of advertising restrictions for food manufacturers and alcohol advertisers is likely to sound the death knell for even more campaigns. If the Food Standards Agency has its way and celebrity endorsements are banned, the Walkers Crisps ads featuring Gary Lineker will soon be no more.

Howell says: “It’s become more necessary than ever to create a long-term campaign, but everything has a shelf life. I bet Walkers has been secretly working for some time now on what will take over from the Lineker campaign.”

Although consumers are often sad or disappointed when a long-term campaign comes to an end, experts say there is always a time to give up on an advertising campaign, no matter how successful. In the case of the Nescafé Gold Blend couple, Nestlé felt the story had run its course. Another example is the Renault “Papa and Nicole” campaign, which was eased out when a new Clio model was launched.

Some companies have savagely killed off popular long-term advertising campaigns only to bring them back a few years later in a bid to reinvigorate sales. Guinness recently reintroduced a number of its past campaigns, including “pure genius” for its Guinness Extra Cold variant.

Another recent example was Tango. It moved its advertising business from HHCL &amp; Partners to Clemmow Hornby Inge, which then created a new campaign using Howell Henry’s old tagline “you know when you’ve been Tango’d.”

“I think we have been unfairly criticised by the advertising industry for our Tango work,” says CHI managing director Sarah Gold. “From our client’s perspective and the sales perspective, the results have been positive. Tango had walked away from its big idea, focusing on its irreverent attitude but ignoring the product truth of the ‘hit of the whole fruit’. The campaign we developed was designed to breathe new life into the original big idea.”

According to figures from Britvic Soft Drinks, at the beginning of 2002 Tango’s market share was down to 4.9 per cent and sales were declining at the rate of nine per cent a year. Since CHI introduced the new advertising with the old tagline, the brand has achieved its highest value and volume share of the market in the last three years, and sales have been up 15 per cent year on year.

There are still some successful long-term brand campaigns running, but they are few and far between. And for those that do persist, the decision to pull the plug is a hard one. It takes years of planning to replace them and, whatever happens, few new campaigns are likely to be as popular or as long-running as their predecessors.

The Government has pushed back its analogue switch-off target to 2012, but this is pointless if there is no detailed plan to achieve it, says Andrew Canter

Carlsberg UK marketing chief for lager brands Iain Paton has left the company without a job to go to. His responsibilities have been handed to director of ales Darran Britton, who looks after the Tetley’s Bitter range. It is understood that Paton is not being replaced. As director of lager brands, Paton reported to managing […]

The Ingram Partnership has been appointed to handle global strategic communications for the final film in George Lucas’ Star Wars saga.The film, which was revealed at the weekend as Star Wars: Episode III – Revenge of The Sith, will be released in May next year. It will be the last of the three “prequels” to […]