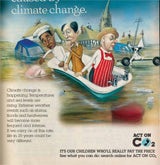 The Advertising Standards Authority confirmed it has banned two press advertisements for overstating the potential damage caused by climate change with “exaggerated” advertisements.

The ASA received 953 complaints about the multimedia “Act on CO2” campaign, created by AMV. BBDO for the Department of Energy and Climate Change (DECC). Consumers, environmental groups and an MEP questioned the veracity of its green claims and the campaign’s overtly political nature.

One ad shows three men in a bathtub over a flooded landscape and includes the text: “Climate change is happening. Temperature and sea levels are rising. Extreme weather events such as storms, floods and heat waves will become more frequent and intense. If we carry on at this rate, life in 25 years could be very different.”

Another depicted two children, Jack and Jill, looking into a dry stone well and included the line: “Extreme weather conditions such as flooding, heat waves and storms will become more frequent and intense.”

The ASA ruled that it is not scientifically possible to make such definitive statements on climate change, adding the ads could have “been phrased more tentatively”. The watchdog says Intergovernmental Panel on Climate Change (IPCC) predictions about the impact of climate change “involved uncertainties” that had not been reflected in the adverts.

However, the watchdog rejected numerous complaints made about a television advertisement used in the campaign. The spot showed a father reading his daughter a bedtime story that warns of the dangers of climate change. Complainants questioned that the ad was distressing and misleading because it presented human induced climate change as fact.

Ed Miliband, Secretary of State for Energy and Climate Change, admited the ads could have been phrased better but that their message still rang true. He added that the Government would continue to launch campaigns “about the dangers of climate change”.

The ASA did confirm it has referred the TV ad to Ofcom for potentially breaching political advertising rules.