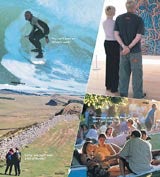 The Government has joined forces with VisitBritain, the inbound travel organisation, to capitalise on food tourism opportunities with both British and overseas visitors.

The move is intended to boost the profile of the UK food and drinks industry, following the foot-and-mouth crisis in 2001 that ravaged most of the British countryside.

The campaign to support the regional food and drinks industry will be led by the Department for Environment, Food and Rural Affairs and Food From Britain (FFB), the Government’s lead export marketing agency.

The two departments will promote British food and drinks products not only to overseas visitors but also British nationals. The FFB is also planning to run a consumer campaign later in the year to promote the industry.

A spokeswoman for FFB says: “The foot-and-mouth crisis did a lot of damage to our food and drinks industry. Our partnership with VisitBritain aims to change the perception of British food, especially outside the UK.”

FFB is also in the process of persuading retailers to sell more British produce.

The promotion of regional food forms an integral part of the Sustainable Food and Farming Strategy, launched in December last year by Tony Blair.

Bodycare International is planning a £6m relaunch of its network of tanning salons and products, following a British Medical Association (BMA) report that links tanning booths with cancer. The report calls for tighter restrictions on the use of sunbeds, which the BMA claims can cause certain types of skin cancer, premature ageing and damage to […]