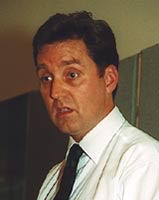 The Government has shrugged off concerns from sporting bodies that they will struggle to replace tobacco sponsorship when it is banned by the proposed Tobacco Advertising and Promotion Bill.

Secretary of State for Health Alan Milburn has rejected concerns, voiced in the House of Commons this week, after the bill met with opposition from Conservative MPs.

Milburn says the Government is committed to banning tobacco advertising at UK-based sports events by July 2003 and global sporting events – including Formula One – by October 2006.

Sports bodies, including the British Darts Organisation, have previously said they will not have enough time to replace tobacco sponsorship.

However, Milburn quoted Cancer Research Campaign data which says boys are twice as likely to become regular smokers if they are motor racing fans. “Our intention remains to implement the policy and the timetable on sponsorship,” he said.

Conservative health spokesman Tim Loughton also threatened to table an amendment for the next reading, which would introduce a “sunset clause” to the bill. This would see the bill annulled after a set number of years if it had failed to reduce the number of smokers in the UK.

However, under-secretary of State for health Yvette Cooper dismissed the plan as a “wrecking tactic by which no one should be convinced”.

A date for the next Commons reading of the bill has not been set.