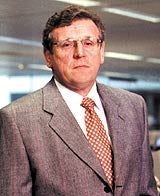 France, aged 55, will retire at the end of the year. It is not clear whether Duff, who joins Granada Enterprises at the end of October, will appoint someone in his place. France says: “I have had a fantastic 28 years in the business, but the time has come to look for new challenges.”

Duff is being brought in to replace Mick Desmond, who has been promoted to managing director of Granada Broadcasting and Enterprises, overseeing Granada’s six ITV broadcasting franchises, as well as ad sales (MW September 6). He arrives at a tough time for Granada Enterprises. ITV’s ad revenue is expected to drop by up to 30 per cent for the month of December compared with last year. Simon Pardon, group sales, director, is expected to report directly to Duff on France’s departure.