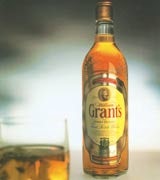 The move follows the family-owned company’s decision to increase the whisky brand’s marketing and advertising spend.

This is the second time the agency has been dropped by the company in less than a year. VCCP lost another William Grant brand – Glenfiddich – last year (MW July 8, 2004).

Grant’s is now looking for an agency local to its key markets in the south of Europe, including Greece and Portugal. A spokesman says that it is not searching for an agency based in the UK.