The shift pushes the Scotch whisky to millennials by presenting it as a social drink for all occasions, whether at parties or in a bar. It takes its cue from younger consumers trading up to more premium brands with the business anticipating much of the growth to come from Eastern Europe, Russia, Poland and Africa.

Future activations for Grant’s will center on the message of “recognising your friends are relevant across all occasions”, the company says. The sentiment is introduced through a short film titled #IOU. The humourous online advert, which has more of an American tone compared to previous efforts, shows the weird and unexpected ways three friends support one another, including at loved one’s funeral and when selling a car.

The FCBInferno-created video introduces the “Stand Together” strapline, further emphasising the brand’s move away from provenance and heritage. Grant’s, which markets itself as a blended scotch, admits the category has “over focused” on provenance messaging in the past, a trend that has left some manufacturers ill-prepared for the slowdown currently gripping the market.

Global Scotch whisky sales suffered one of their worst drops in recent decades, plummeting 11 per cent for the first half of the year – knocking around £220m off overall sales – according to the Scotch Whiskey Association. Sales have been stunted by declines in China and the Americas.

Shane Hoyne, Grant’s global brand director, says the brand is making the move to be more accessible in target markets where costlier single malts are more sought after, while also protecting share in Western Europe and US where blended scotch whiskies are most popular.

“We are focusing on connecting with our consumers through Social Media and digital”, he adds.

The revamped strategy forms part of wider overhaul of William Grant & Sons portfolio following its rebrand from First Drinks earlier this year. Changes were made to better align the UK and international business that led to the marketing team being reshuffled.

The business has previously told Marketing Week it would pour more of its marketing budget into organic content to convince influencers to drive word of mouth for its brands. 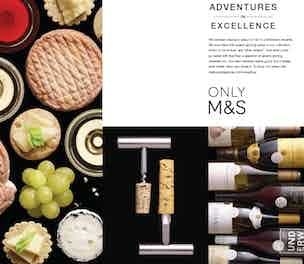 Marks & Spencer is dropping its ”Leading Ladies” fashion and ”Make today delicous” food campaigns in favour of one unified brand idea for the first time as it looks for clothing sales to match the success of its food business.