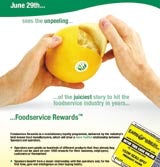 The Diary has received all sorts of unmarked and unsigned mail over the years. The razor-blades always come in handy, and the poison-pen letters can be redrafted and sent on to sponging relatives. Even the ticking box that arrived this morning will no doubt prove indispensable as a metronome, or deathwatch beetle bait (the Diary’s rafters have long been infested).

But one particular anonymous parcel, which arrived last week, had the Diary in a spin. An innocuous brown box, when opened, revealed not broken glass, nor anthrax spores, but a grapefruit, bearing the legend “Keep Your Eyes Peeled” and a hastily scrawled date, June 29.

Fearing an assassination attempt, the Diary rushed the package to the local CID, who traced it to a company called Foodservice Rewards, which is launching (on June 29) a loyalty scheme for catering managers and suchlike.

The Diary, never one to miss a trick, already has enough points for a holiday in the Caribbean. And if anyone has a use for 45 gross catering-size tins of corned beef, please write to the usual address – and do make sure you sign your name…The Diary has always imagined that, when working on a pitch, dozens of creatives with white hair furiously chalk up strange symbols on a blackboard and after a few days they come up with an end product that changes the world.

Former Chartered Institute of Marketing chief Peter Fisk has kindly confirmed the Diary’s assumptions in his new book, Marketing Genius, in which he explains how to apply the genius of Albert Einstein to marketing.

Fisk will further explain his theories on June 15 at Bank Restaurant in Birmingham. The event will start at 7.45am, and “will conclude on time to allow attendees to return to the office for the start of the working day”. Which will be news to anyone from London wishing to attend.