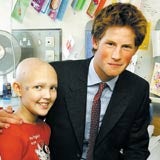 The search follows the decision of executive chairman Nigel Clark to retire later this year after ten years in the job. Part-time executive director of fundraising Dona Selby is also due to retire from the charity soon.

GOSHCC has traditionally enjoyed high-profile support. Last month, Madonna launched her children’s book at the hospital with her daughter Lourdes. Peter Pan author J M Barrie famously donated the rights to the best-selling children’s story in 1929. The paediatric hospital was originally founded in 1852 and quickly attracted the patronage of Queen Victoria and Charles Dickens.

The charity is raising money for a £313m redevelopment of the Bloomsbury hospital site, which is only partially funded by the NHS. It is running a appeal to raise money and awareness of facial disfigurements in childhood.

The hospital treats more than 90,000 children every year.