Outdoor may be one of the oldest advertising platforms in the world, but that doesn’t mean it has to be old-fashioned. A spate of digital innovations like weather-sensitive displays, near-field communication (NFC) and augmented reality mean it is anything but outdated.

Advertisers still need to find the right balance between innovation and impact though. Judging by the response to its trial of ‘smart bins’ in the City of London, outdoor messaging firm Renew might have concentrated too much on the former when it enabled advertising screens displayed on the bins to collect data from people’s smartphones as they walked past.

Renew has made assurances that all the data was anonymised and used purely to quantify footfall in certain areas, but at the behest of the City of London Corporation the trial was ceased in August.

Nonetheless, brands seem willing to juggle the risks and rewards of the targeted or interactive technology now available in outdoor advertising. One of the most iconic outdoor sites in the UK is the Piccadilly Lights in London, owned by property company Land Securities, which is currently being extended with a new 25 metre x 5 metre LED screen for the first time since it was built in 1908.

Coca-Cola is the longest resident of the landmark site, having advertised there since 1955, and although the impact of having its brand in lights hasn’t changed, the digitalisation of the sign means the way it delivers the message has.

“The versatility of the Piccadilly Lights means we are able to offer tailored, interactive experiences that are relevant and current,” says Chris Deere, head of brand activation at Coca-Cola.

“For example, this year we gave consumers the opportunity to get their name in lights as part of our ‘Share a Coke’ campaign, and currently we have brought to life our support of the Special Olympics via specially created content to showcase the athletes taking part.”

Coca-Cola is now looking at how it can use the digital components of the site for its Christmas truck tour campaign.

More and more, advertisers are opting to integrate technological aspects into their outdoor campaigns. The nine billboards on JCDecaux’s Cromwell Road site have been digitalised and rebranded as the Cromwell Road Digital Gateway, meaning advertisers can now buy the series as one space, which brands including Heineken and more recently Mini have taken advantage of.

As part of its ‘Not Normal’ campaign, the BMW-owned car marque is showing Mini owners relevant ads as they drive past, which are triggered by a team of spotters. Although the way in which ads are activated isn’t necessarily the most hi-tech, the speed at which they can be uploaded does create new opportunities for advertisers.

Meanwhile, Costa ran a series of ads at selected Tube stations to build awareness of its iced beverages, which were activated only when the temperature exceeded 22 degrees.

Ben Cook, retail marketing manager at Costa, says: “Throughout June and July, when the ads were running, we had our most successful year ever for Costa Ice. At some points it represented more than a third of our beverage sales, which is a huge improvement.”

However, there is obviously an element of uncertainty when trialling new technology like this, he adds, particularly as the campaign was planned in advance of the heatwave and there was no contingency plan if the weather had been poor.

Like iced coffee, the popularity of cider increases when the weather is warm, which prompted AB InBev to serve heat-activated location-based ads for its fast-growing Stella Artois Cidre brand.

The ads, which were developed in partnership with Posterscope and Liveposter, were triggered when the temperature rose two degrees above the average in each location.

Conversely, business for food delivery brands like Domino’s tends to slow down during the summer, with its peak occurring in the autumn and winter when people spend more time indoors. To remedy that, the pizza company worked with Arena Media and Iris Worldwide to launch an outdoor campaign urging people to order on the go via its mobile app, which Nick Dutch, head of digital at Domino’s, says led to a “significant leap” in app downloads.

He says: “We want to flex our business and get people familiar with using their mobile to order on the way home, or when they leave the office to pick up in-store.”

For the second phase of the campaign, Domino’s enabled NFC.

“It’s important for us to understand how people are using NFC to see if there is an opportunity there. We’re not investing in it and expecting millions of people to download the app through NFC today, it’s more about getting first-mover advantage so we understand how it works.

“We can learn from this campaign and each time do it better, so when NFC becomes [more commonplace] we’ll be in a much better position than those only just starting to play around with it.”

As part of its Office 365 campaign, Microsoft targeted commuters “unobtrusively” by sponsoring BSkyB’s The Cloud Wi-Fi service at 15 Network Rail stations, as well as advertising at 150 additional stations in the UK.

Philippa Snare, chief marketing officer at Microsoft UK, says: “One of the goals of Office 365 is to enable customers to use smartphones as mini-computers. Free Wi-Fi is a key enabler of this – with fast internet connection letting people work as they would in an office.”

As part of the sponsorship agreement, Microsoft rebranded the landing page seen by all users of The Cloud prior to logging on to the Wi-Fi, which included images and links to Office 365. More than 1.5 million mobile users accessed the branded Wi-Fi over the month-long campaign, which generated more than 2 million ad impressions and helped increase subscriptions.

Likewise, British Airways looked to strike a balance between impact and technology as part of its ‘Fly To Win’ campaign, which displayed the names of winners of a flight simulator competition on giant digital displays around Victoria Station.

Working with JCDecauxLive, the screens also prompted commuters to take part in the competition for a chance to win plane tickets every 15 minutes, and as a result almost 11,500 tried their hand at the game.

“No matter where commuters were throughout Victoria they could interact with the event, resulting in greater reach,” says BA’s head of marketing Abi Comber.

“To have live feeds announcing winners and showcasing them across the station amplified the activity and created real buzz and engagement. The same impact would not have been reached if using traditional outdoor media.”

Yet, despite brands’ gravitation towards new outdoor technology enabling targeting or interactivity, there is still a place for more traditional outdoor media formats. This applies not only to prominent sites like Piccadilly Lights that have undergone digital makeovers, but also to more subtle hand-painted wall art, which is also experiencing a resurgence.

Original artwork, or ‘ghostsigns’, for Hovis, Bovril and Nestlé, among other less well known brands like Bile Beans and Peterkin’s Custard, can still be made out on walls across the UK, and in 2009 the History of Advertising Trust launched a nationwide effort to photograph, research and archive the last surviving examples.

While most have faded and been replaced – first with printed billboards and then their digital equivalent – the nostalgic nature of these bespoke artworks is something which easyJet, Converse and Channel 4 have all recently tapped into.

The cover concept, developed by Global Street Art and Ink Publishing, has also been turned into an augmented reality experience via Blippar, which reveals a video of the mural being painted and an interview with the artist.

Additionally, the airline invited people to take their picture in front of the painting and share it via Twitter using the ‘hashtag’ topic #coverstars in order to win flights.

Meanwhile, ahead of the new series of gang drama Top Boy, Channel 4 created a 5 metre high graffiti wall on White Cross Street in east London, near where the show is set.

The artwork, created by street art duo Best Ever, features the show’s two main characters, Dushane and Sully, and was part of a wider out-of-home campaign developed by Talon and OMD UK.

Graffiti was an important element of a three-day campaign for shoe brand Converse too, which worked with blowUP Media to erect four giant posters in east London that were then painted over by artists as part of its ‘Shoes are boring, wear sneakers’ campaign.

Fusing new with old and striking the right balance between innovation and impact is the way the out-of-home sector is heading, because while outdoor media is one of the more traditional platforms, its potential certainly hasn’t run out of steam.

As part of its campaign for music app O2 Tracks, mobile operator O2 set up interactive outdoor ads offering users the chance to select and listen to 30-second previews of all 40 songs in the official singles chart.

“While traditional high-impact outdoor sites are always important, at O2 we recognise the value of thinking differently when it comes to media and creative planning for our outdoor campaigns,” says advertising manager Cameron Owens, adding that the company looks to include an element of digital innovation in all its campaigns.

“The interactive, sound-enabled outdoor panels are a great example of this. People could scroll through our O2 Tracks Official Top 40 app and listen to the songs there and then, adding a level of innovation and personal interaction that can’t always be achieved with traditional billboards.”

As a result, 42,207 people interacted with the brand via the 65 screens owned by Primesight, located at cinemas nationwide. That equated to 3 per cent of total footfall.

“It was really important for us to let our audience demo this app as much as possible throughout the campaign,” adds Owen.

“With over 2 million track clicks across the screens, this campaign made it clear that given the right type of interactive creative placed in the right environment, we can achieve a much deeper level of engagement with our audience than via a traditional posting.”

Domino’s has launched a nationwide advertising campaign to introduce its new “Greatness” positioning and promote its recently revamped logo. 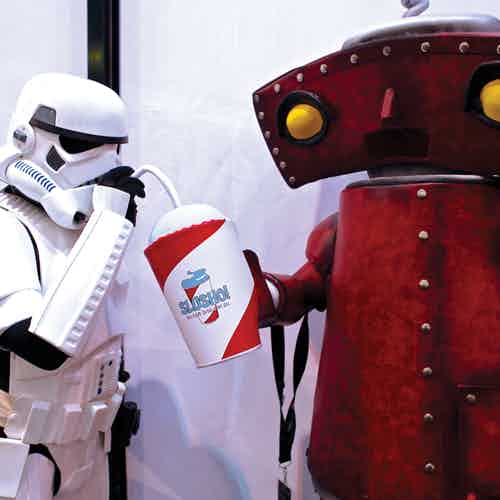 Content marketing has become an essential ingredient in the marketing mix as brands seek to deepen relationships with their consumers and promote their own story.