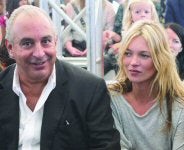 Sir Philip Green, the billionaire retail tycoon behind fashion group Arcadia, has never been one to turn away from a high street battle. But recent developments at his standalone department store business Bhs suggest the flamboyant entrepreneur is in for a fight to transform the chain’s fortunes.

Green’s woes include a sharp drop in profits at Bhs and the unexpected departure of design guru Jane Shepherdson from Topshop, and were made all the worse by the exit last week of Bhs marketing director Beverly Churchill, as revealed on marketingweek.co.uk. The chain remains tight-lipped about the reasons for Churchill’s exit, or whether she has a job to go to.

Amid such issues, the continued resurgence of Marks & Spencer, led by rival chief Stuart Rose, is enough to turn the Bhs boss turn apoplectic.

Two years ago, the charismatic Green waged war on M&S after abandoning his £9.1bn takeover approach for the chain. In a dramatic sequence of events, M&S replaced embattled chief executive Roger Holmes with Stuart Rose, the man credited with reviving the fortunes of Arcadia before Green took over the business. Rose and his colleagues went on to successfully fend off Green’s seige of M&S.

War on the High Street
Green emerged from the bitter public saga defiant, vowing to boost sales across his Bhs department stores by at least 28% in a bid to steal market share from M&S and other high street rivals. He launched the assault with a £3m TV Christmas advertising campaign to promote the brand – the first since he took over the business in 2000 – and installed Stephanie Chen, a former design director of Debenhams, to head womenswear.

Today, not only has Green’s promise of “judgment day” for M&S failed to materialise, with the retailer posting an increase in like-for-like sales of 8.2% in the 13 weeks to July 1, but the fortunes of Bhs appear to be on the slide.

In September, he was forced to slash prices in a desperate attempt to stabilise the business after profits plummeted 60% to £42.3m before tax, with underlying sales dropping 7.1%, in the year to April 1. Green – who controls nearly 10% of the UK clothing market – blamed the collapse on mistakes in the selection of women’s clothing, a role he has now taken over himself, compounded by under-investment in the brand.

Richard Ratner, a retail analyst at Seymour Pierce, says quite simply “Philip totally took his eye off the ball” with a series of poor buying decisions, leaving the brand in tatters. Ratner says Chen attempted to shift the focus to a younger market, but instead made the chain “much too fashionable, while also cutting quality”.

In his latest research note, Ratner elaborates: “The sales picture may not have been good, but Philip made the mistake of handing the buying to someone who focused almost entirely on price to the detriment of quality.” He adds: “Despite the [store] refurbishment last year, it proves the point that unless you have the right merchandise it makes little difference.”

Moreover, while Arcadia’s brands – including Miss Selfridge and Dorothy Perkins – have flourished under the guidance of a cohesive team, a lack of continuity at Bhs has seen it struggle to develop a strong identity in an increasingly hostile retail environment.

Stuck in the Middle
Some analysts believe Bhs is “caught in the middle” between the price-savvy value players and the more upmarket chains. Mike Godliman, a director at Pragma, agrees the business is being squeezed on both sides. He says: “The likes of Primark and New Look are coming up with very clever, cost-price fashion labels, then there’s the supermarkets that are hitting the older demographic head on.”

Bhs’ lacklustre financial performance is another blow for the chain. Last year, Green, who was recently knighted in the Queen’s Birthday Honours, captured headlines when he awarded his family the biggest pay cheque in British corporate history, banking £1.2bn – a payout of over four times the pre-tax profit of his Arcadia fashion chain, which stood at £253m in 2004. Green sidestepped a hefty tax bill by paying the money to his wife Tina, who has official ownership of the family’s investments and resides in Monaco.

Earlier this month, Shepherdson – credited with reviving iconic fashion chain Topshop – resigned amid reports of a dispute with Green over his decision to sign supermodel Kate Moss on a multi million-pound deal to design and create new collections for the chain. Shepherdson has dismissed the allegations as “laughable”, but her comments have done little to dispel rumours of a rift between the pair.

Despite a turbulent few months, Green has now taken control of the struggling Bhs chain and is once again redrawing the battle lines. Industry commentators argue he will first need to ensure there is a strong merchandising and marketing team in place.

Celebrity Makeover
“He needs a good team that can translate ideas and make them accessible to the Bhs customer,” says Verdict Research senior retail analyst Maureen Hinton. While Green has yet to identify the team charged with taking the brand forward, he has been campaigning to raise its profile. In a public show of his commitment to repositioning Bhs, he has brought in celebrity chef Gordon Ramsay and interior designer Kelly Hoppen to develop furniture and homeware ranges, further boosting a part of the business that has experienced recent success.

While industry analysts welcome the new celebrity endorsement deals, Richard Oldham, senior consultant at branding consultancy The Value Engineers, raises doubts over whether that will be enough to differentiate the brand from its well-established competitors. Oldham argues the initiative will need to be supported by significant investment in the brand, including a programme to upgrade its entire store network.

Tim Wall, director of creative marketing firm DNX, who has worked on the Bhs direct marketing account, describes Green’s performance so far at the chain as centred on cost control and business efficiency “rather than making it more attractive to customers”.

Wall is among a host of industry commentators who have criticised Green for failing to adequately invest in the brand’s marketing and communications strategy. In the past he has used some TV advertising, usually in the run-up to Christmas, but the retailer mainly relies on print and outdoor advertising for most of its promotions. Meanwhile, heavyweight TV and print campaigns for M&S food and fashion, featuring celebrities from singer Bryan Ferry to model Twiggy, are widely credited with bringing shoppers flooding back to the chain.

One advertising insider describes Green as “a man who is not comfortable with advertising”. The source adds: “Marketing people are forever going to be at a slight disadvantage with him in charge, as opposed to Rose, who clearly believes strongly in the brand and is willing to invest accordingly.”

While the details of Bhs’ revival strategy have yet to be revealed, the pressure is on Green to reconnect with his core customer base. With its buying proposition back on track, higher profile advertising may be the key to a revival of the brand’s fortunes.