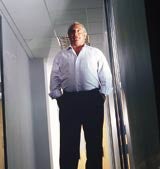 High street fashion retailers rarely commission television branding campaigns, preferring instead to rely on print ads of models posing stylishly in their clothes and getting good press coverage in the right places.

A few fashion chains have splashed out on the box. Gap, which has used television to show its US-created branding campaigns featuring singing, dancing celebrities to underline its place in the world’s “pop culture”, is a peculiarity in the UK.

Marks &amp; Spencer (M&S) had never indulged in cathode-ray extravaganzas until it was knocked off its perch as the king of the UK high street, and some may wonder how much good going on television has done it over the past four years. Uniqlo, the Japanese “no logo” retailer, ran a series of ads when it launched in the UK in 2002, but the chain retrenched after a couple of years and the campaign disappeared. Ten years ago, Bhs ran the “It’s a happening” TV burst, but with unconvincing results.

And now it has emerged that Britain’s most famous clothes retailer, Philip Green, is planning a round of television campaigns for his chains.

Last week, Green hired ad agency Grey to create an autumn television campaign for Dorothy Perkins (MW last week), which will go up against the launch of the new “Your M&S” print campaign, the first under M&S’s new management. There will also be a print campaign for the Limited Collection, which features model Helena Christensen.

It was also reported that Green had recruited HHCL/Red Cell to come up with a Christmas television campaign for Bhs.

Green is something of a novice in the world of television advertising, having previously eschewed this method of trying to woo customers. Famed for his retailing abilities, livening up fading chains and keeping a tight rein on costs, the idea of Green as an advertising agency sugar daddy is a strange one. It has set people wondering about his aims. “Looking at it cynically, I would see a big lump of Philip Green’s ego in this,” says one advertising observer.

When he withdrew his &£9bn takeover bid for M&S last month, Green pledged to wage war on the retailer. His Arcadia group – which includes Burton, Dorothy Perkins, Evans and Top Shop as well as department store chain Bhs – would fight M&S in every shopping centre in the country and “trade their socks off”, he promised. This is not expected to be a price war, but a battle over quality, style and value. While M&S had a 13.5 per cent share of the womenswear market for 2003, Arcadia Group had 10.4 per cent, and Bhs had 2.7 per cent (Verdict Research).

It was assumed that TV advertising would be part of the armoury, but Green tells Marketing Week that his decision to hire the agencies is unrelated to his recent comments on M&S: “It is not related to anything. We have got good merchandise and Bhs has been on the high street for 85 years.”

Green believes that running a Christmas campaign for Bhs is a natural development, though last week was denying press reports that an agency had been appointed. But he explains: “Bhs is not a fashion retailer, it is a variety store retailer that competes with department stores in the last quarter of the year. M&S has advertised for the past three Christmases, so have Argos, Debenhams and Woolworths. We take out ten to 12 per cent of the clothing for the Christmas gift range at the front of the store and have got the best Christmas range on the high street.

“Our market research shows that of all the people we get through the front door, we convert more of them to buyers in Bhs than in any of our other brands. We have spent no marketing money for four years, though it has been on our menu to start it.”

But Green stresses that his dalliance with advertising will be a test. “For Dorothy Perkins we are only doing a trial in one region to see what reaction we get with that. We spend &£35m on marketing Arcadia and Bhs each year so we think we understand the market. When we have done it, we will find out the answer. We will run it and see what happens.”

It is a contentious issue as to how much high street fashion chains actually benefit from TV advertising. Despite clothes retailers raking in &£14bn in sales each year, they spend comparatively small amounts on television promotions. Their high street shop window displays are, after all, their own three-dimensional advertising hoardings. Women tend to shop the whole high street, dipping into as many stores as possible convinced that they will be able to find something suitable in any of them, so some people think television ads are unlikely to increase the numbers of people visiting a store.

As Verdict Research director Richard Hyman says: “Most prime-site fashion retailers already get visited by the people they are looking to attract, the trick is to sell to them when they come in. Having the right store in the right location is what drives footfall.” He accepts Green’s logic for the Bhs Christmas campaign, but adds: “I would be surprised if we saw consistent advertising for the Arcadia chains, I am not convinced TV works for fashion.”

Hyman says the scatter-gun nature of TV advertising means a lot of money is wasted communicating with people who are never going to be potential customers. Top Shop, for example, relies more on PR exercises and ads in tightly targeted magazines.

It will be down to Grey and HHCL to prove that ad agencies can help Green’s retail interests improve footfall and sales through the bursts on TV. If they succeed, it could boost the whole advertising industry as other retailers may want to follow suit.

Hyman adds: “What may be happening is Green and his team are saying, ‘we haven’t spent much on advertising before, we are moving more aggressively onto the front foot – convince us and maybe we’ll spend more’.”

One advertising executive insists that while people do tend to “shop the whole high street” they often have a “portfolio” of shops they visit, and TV ads can help get a chain on to that list. If people think there is something exciting happening at a shop, they will be more likely to head there first, and it can raise expectations about a new seasonal range. “If a chain has changed its product offering and in-store environment, TV advertising can help,” says the insider. The source says TV ads can also help overcome “window blindness”, where people may not even bother to look at the shop windows of a store.

M&S will be doing its own autumn campaign, signed off by Steven Sharp, the marketing director brought in by M&S boss Stuart Rose earlier this summer. The two worked together at Arcadia before the company was bought by Philip Green. 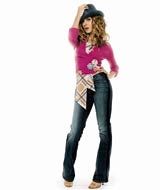 Autumn ranges tend to be the crucial launch of the year, even more so than spring as there are more expensive coats and outerwear to sell. The autumn range needs to fly off the shelves to clear in time for Christmas. It is also important to build a strong momentum with customers in the run up to the festive period.

M&S has spent up to &£100m on advertising through agency Rainey Kelly Campbell Roalfe/Y&R over the past four years, though much of this has promoted food rather than clothing. The performance of the chain and its advertising over the next six months will determine the agency’s future hold on the account. If all goes well, it may continue, otherwise it could find its position reviewed after Christmas.

The outcome of the forthcoming advertising battle will have widespread ramifications. The management instability at M&S has meant there have been a number of twists and turns in strategy.

It all started with the “Exclusively for Everyone” sign-off line and the much-derided TV ad of a naked woman running up a hill and shouting “I’m normal”. Even the then chairman Luc Vandevelde said the campaign had been a mistake. The next year, the chain pulled back from this in recognition that a branding campaign was not what was needed and launched the “Perfect” campaign, focusing more heavily on products.

Now M&S will have to fight a TV advertising battle with both Bhs and Dorothy Perkins. HHCL ran the Bhs “It’s a happening” television advertising campaign ten years ago, which featured a travelling roadshow touring Bhs stores and inviting customers to become catwalk models wearing the chain’s clothes. Green is sceptical of the value of that campaign.

“That’s probably why they ended up selling the chain to me for &£200m,” he says. When asked if the purpose of the coming advertising is to increase the number of people going into Bhs, Green says: “I would assume it is to drive more people into the store.” He also denies reports that there are plans to hire an agency for men’s retail chain Burton.

Green promises that in the ensuing war between his chains and M&S, “the big winners are going to be the customers”. With Dorothy Perkins spending up to &£4m and Bhs committing similar sums, Green might have added that advertising agencies also stand to do pretty well out of this latest high street confrontation.