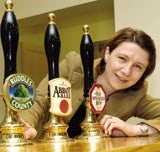 Greene King Brewing Company marketing director Sue Thomas-Taylor has been promoted to commercial director for Greene King Pub Partners, the tenanted and leased pub side of the company.

Thomas-Taylor has been marketing director for the group’s brewing arm for four years. She was brought in by Rooney Anand, who until May 2005 was managing director of the brewing division. He is the chief executive of the group.

Justin Adams, the new managing director of the brewing division, is searching for a marketing director to replace Thomas-Taylor.

Thomas-Taylor was also instrumental in the launch of Beer To Dine For, which is both a campaign to promote the drinking of beer with food and a new product that has achieved significant distribution levels in UK supermarkets.