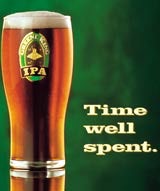 Anand was at the forefront of Sara Lee Bakery’s purchase by Hibernia Foods. Sara Lee is looking for a new UK managing director to replace Anand, whose role includes overall responsibility for marketing. The new managing director will oversee the company’s two divisions – retail and food service (catering) – and will report to Hibernia chairman and chief executive, Oliver Murphy.

A spokesman for Greene King says: “Anand’s knowledge of retailing puts him in a strong position to add value to our expanding businesses.”

Anand says: “This is a dynamic company with excellent brands which has been performing well in tough market conditions.

“There is still potential to be exploited and I look forward to being part of a team which is able to demonstrate real cask beers can perform well if they are nurtured by the brewers and supply chain.”

Anand, who will also sit on the Greene King board, starts his new job on August 6.

The Diary had a brush with fame this week as it went visor-to-visor with Germany’s second-best racing driver, Ralf Schumacher. Journalists were invited to challenge Ralf in a virtual race around Silverstone, organised by Compaq. Ralf duly arrived, but his face suggested: “I’m contractually obliged to be here. Please don’t touch or talk to me.” […]

With respect to David Benady’s article (MW July 5), marketers should remain pessimistic about the economy. I have heard of three small but established companies going out of business in the past fortnight, all of them in marketing services. I don’t agree that the downturn in ad revenues is seasonal, due to diverting budgets into […]

The kind of moonshine Red Bull likes is the one it intends to bottle 13 times a year under the influence of a full moon. It sincerely believes a new caffeine-spliced water product, LunAqua, will have the same cult success in European nightclubs currently enjoyed by its famous energy drink. But there’s another, less agreeable, […]