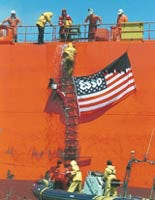 Environmental pressure group Greenpeace International is looking for an agency to create its first global TV campaign for six years. The campaign will raise awareness of environmental damage to the world’s seas.

The successful agency will create advertising for Greenpeace’s “Oceans” campaign, which calls for an end to commercial whaling and for protection of ocean ecosystems.

The pitch will be run from the group’s Amsterdam office. In the past, Greenpeace has used Simons Palmer Denton Clemmow &amp; Johnson (now TBWA/London). In the mid-Nineties the agency created a multi-million pound global TV campaign with the aim of raising the group’s profile.

More recently in the UK, Greenpeace has commissioned Ideas Unlimited to create inserts to boost its donor base. The group has hired youth marketing agency Third Planet to encourage young people to lobby governments on environmental issues. The agency designed a website, Saveordelete.com and also created a poster and postcard campaign.

Greenpeace was formed in 1971, when a group of anti-war protestors sailed a ship named Greenpeace to Amchitka Island, Alaska in an effort to stop nuclear testing. By 1974, after further voyages by the ship, the UN General Assembly announced that all future nuclear testing would be conducted underground – a move which was hailed as a success for the group.

The AMP Oval cricket ground has installed revolving perimeter advertising boards, similar to those used at football matches. The move means ten to 12 ads can be shown on one perimeter board during a match. Ten boards have been erected at the Oval, home to Surrey County Cricket Club. The system, which has been installed […]