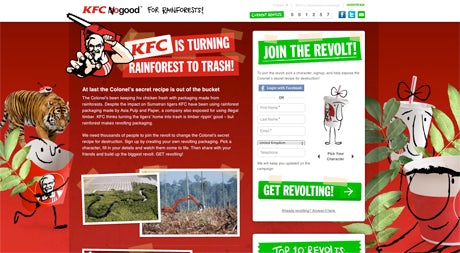 Activists scaled to walls of the fast food chain’s headquarters in Louisville Kentucky and hung a banner demanding that KFC stop dealing with supplier Asia Pulp and Paper (APP) which the environmental group claims has been exposed for “wrecking Indonesia’s rainforests and its use of illegal timber”.

The activity is part of an ongoing global campaign planned against KFC. Greenpeace has also launched an online campaign using KFC parody websites asking people to help save the forests and endangered Sumatran tigers.

Greenpeace says: “We’re here today to expose KFC’s secret recipe. KFC customers worldwide will be horrified to learn that the fast food giant is using rainforests to make its packaging. The decisions being made here at KFC HQ are fuelling the destruction of some of the world’s last remaining rainforests, driving climate change and pushing the Sumatran tiger closer to extinction.”

“Other companies recognize that rainforest destruction is bad for business and that – until it cleans up its act – trading with APP is a peril to their brand. KFC’s main competitor, McDonald’s has acknowledged the importance of rainforest conservation, and has begun implementing global commitments to address the issue. KFC, and its parent company YUM! Brands, must immediately drop APP and commit to a policy that protects rainforests.”

The group claims that other global brands including Kraft, Adidas, and Unilever has ceased working with APP.

Greenpeace has previously targeted brands including Volkswagen and BP but earlier this month, one of its own advertising campaigns was banned by the ASA for ”encouraging anti-social behaviour.”

A spokesperson for KFC in the UK and Ireland says: “100% of KFC UK & Ireland’s packaging is either recycled or from sustainable sources. Neither KFC UK&I, nor any of our suppliers, source from APP.”

Update (24 May): Greenpeace claims that 28,000 people in the US have sent letters to KFC in response to its campaign in just three hours.

APP has hit back at Greenpeace’s attack on KFC saying: “ In its latest report Junking the Jungle, Greenpeace has yet again mislead the public regarding the facts … APP deplores this distortion of the facts by Greenpeace. We are asking that Greenpeace stops portraying Indonesia and its leading companies as the villains in the fight against climate change at a time when our Government and the rest of Indonesian society are making huge efforts to preserve our rainforests and reduce greenhouse gas emissions substantially over the rest of this decade.”

The top 100 most valuable global brands – read the cover feature here Businesses that have purpose beyond profit are growing at double the rate of other brands, read why here Unilever’s chief marketing officer Keith Weed talks about brand value and sustainability In the name of maintaining MasterCard’s ‘Priceless’ brand strategy, Paul Trueman, the […] 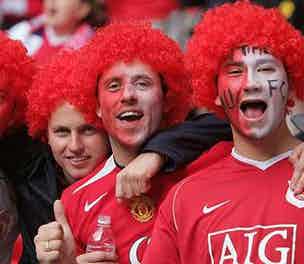 Football clubs should focus the majority of their marketing efforts on core fans and not chasing the “quick buck” available from sponsors’ overseas interest in the Barclays Premier League or risk damaging the long-term interests of the brand, according to a Manchester United exec. 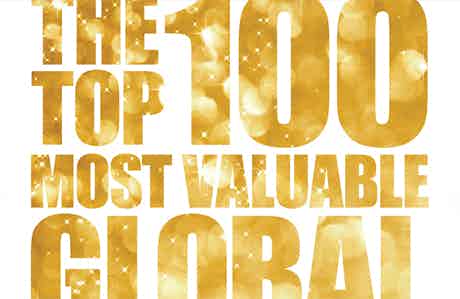 The top 100 global brands shows Apple increasing its lead and the top brands getting younger, while businesses that have a purpose beyond profit – and women on the board – thrive.