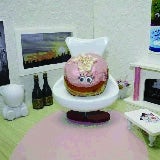 The campaign aims to “bring to life” the four new flavours – Jaffa cake, triple chocolate vanilla, strawberry milkshake and chocolate snowball – by giving each variant a personality to interact with consumers on Facebook, YouTube and Twitter.

Graeme Nash, head of marketing at Greggs, says: “These new products are such a big step forward for us in terms of innovation and product development, we needed a campaign that not only celebrated the launch of four new products but really brought them to life for our customers.”

Rival Krispy Kreme also offers a range of unconventionally flavoured doughnuts, including branded products such as limited edition Glamour magazine glittery variant. Krispy Kreme is upping its experiential activity as it expands to more locations over the coming months.

Greggs said earlier this year it is to switch to tactical marketing activity as it seeks to become the UK’s biggest sandwich and savouries outlet.

The baker has also made a move into the supermarket, by launching its first branded frozen food range in Iceland as part of a trial to see whether its products can work in the take-home market.

Greggs reported a 2.1% increase in sales to £662m for the year ending 1 January. The baker said growth was driven by new stores as like-for-like sales, which exclude new stores, remained flat.

While some of the gamification ideas proposed by Betfair (MW last week) may improve customer engagement and retention on its website, in the current age of social media it could go even further to achieving its goal by encouraging collaboration between visitors. This mechanic appeals to the natural desire to work together and solve a […]