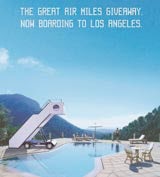 Air Miles, which is transforming itself from a loyalty scheme into a broader travel service brand, has taken its £10m advertising and below-the-line business from TBWA/London and handed it to Grey London ahead of its relaunch.

The relaunch of Air Miles will take place later this year. The £10m figure represents a doubling of spend on last year.

The pitch, which was overseen by Air Miles managing director Drew Thomson, involved only the incumbent and Grey. Grey’s chief executive Garry Lace formerly oversaw the business when he was chief executive of TBWA, and the agency had already been given a small part of Air Miles’ business at the beginning of July, when it was appointed to promote a UK roadshow (MW July 3).

Thomson says: “We are relaunching and trying to reposition how we are perceived. We were genuinely blown away by Grey’s idea.” Thomson also adds that because Lace is relaunching Grey London he feels an “affiliation” with the agency.

TBWA has worked on the business for more than three years, since it was appointed by Air Miles’ former marketing chief Amanda MacKenzie in 2000.

The loyalty scheme has undergone a number of changes since Thomson was appointed managing director from parent company British Airways in 2000. The company now offers package holidays and offers flights on five other airlines as well as BA.

It was also forced to rethink part of its strategy following the launch of rival loyalty card scheme Nectar. The company ditched its long-term partner Sainsbury’s and agreed a partnership with rival supermarket Tesco.