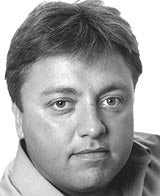 Lace, 35, started his career 12 years ago at Saatchi &amp; Saatchi. He will join Grey as chief executive at the start of next month, reporting directly to Grey Global Group Europe, Middle East and Asia president Carolyn Carter.

Grey has a reputation as an agency wedded to a core of multinational advertisers, and is not renowned for creativity and UK new business gains. By contrast, TBWA is famous for its creativity – it is the agency behind high-profile campaigns for Sony PlayStation and French Connection.

Lace replaces Martin Smith, who was ousted from Grey 18 months ago. He was made chief executive of TBWA last year, having joined the agency in 1998 from Euro RSCG Wnek Gosper, where he headed the Peugeot business.

Since becoming chief executive at TBWA, Lace has introduced various schemes, including a risk and reward venture – which gave Holsten Pils the chance to pay TBWA on the basis of how many bottles of lager its advertising helped to sell.