GSK is on a mission to position itself as the pharmaceutical industry’s leader in science and technology, as it rebrands ahead of demerging from its consumer healthcare business in July this year.

The split will see Haleon, formerly GSK Consumer Healthcare, start a new life as an independent business in the consumer healthcare category, while GSK will become a fully focused biopharmaceuticals company.

As such, the firm has today (9 June) rebranded for the first time in 20 years to reflect the transformation of the business and its strategy, which will put its research and development (R&D) focus on the science of the immune system, human genetics and advanced technologies.

“If we think of Apple or Tesla in their industries, that’s where we want to be. We want to be [seen as] the science and tech leader in the pharma industry,” GSK’s brand implementation lead Georgie Wiltshire tells Marketing Week.

By rebranding, GSK aims to signal to patients, customers and investors that the business has new ambitions, while respecting the heritage of the brand and ensuring it represents the diverse staff of people behind it, Wiltshire adds.

“This branding is absolutely to bring our ambition to life and really signal that this is a new GSK,” she says.‘Innovation, science, humanity’: Why GSK picked Haleon for its consumer healthcare rebrand

GSK worked with Wolff Olins on the new identity, after searching for a partner to “push us above the sea of traditional pharma and really make us the innovation leader”.

Rolling out across the business over the next few months, the identity retains the brand’s name and well-known orange colouring, but everything else about the logo and brand assets is new and inspired by imagery found in biosciences.

According to Wiltshire, the first step of the process was to “really understand” what equity the brand already had, which made clear the distinctive orange colour had to stay and provide a layer of “warmth”.

“But what we really wanted our branding to bring to life was our innovation, science and tech. That was a huge focus, to shift us towards that,” she says.

GSK is a now a very different company to what it was when it last rebranded two decades ago, while the digital world has also completely transformed, Wiltshire notes. Creating branding that could be flexible across digital platforms was therefore also key.

GSK’s highly recognisable plectrum shape has also been replaced with a new holding shape, internally known as ‘the signal’, which intends to reflect the community aspect of GSK’s ambitions.

Close attention was also paid to accessibility, with all assets tested for legibility on-screen and in print. The identity also contains a series of adaptable 3D forms enabling GSK to shape environments that suit all users.

Wiltshire says reactions from colleagues so far has been “amazing”.

“The first thing is relief that we’re still orange,” she says. “Then absolutely people can see that we are trying to be that scientific tech leader in the pharma industry… but that we also still have that warmth, that we’re here for patients and people. That’s really come through as well.”

According to Wiltshire, the new brand builds on the transformative “momentum” already set by the business, reinforcing the purpose, strategy and culture outlined last year.

GSK’s new purpose is to ‘unite science, talent and technology to get ahead of disease together’. Or more succinctly, ‘Ahead Together’.

“This really captures the collaboration both internally – working with diverse people in teams – and externally. Our innovation partners are other academia partners, so that togetherness is something we think is really important to GSK,” Wiltshire explains.

“And uniting science, tech and talent is going to be huge for us. The way that we’re focusing on genetics and data analytics is making our science just come to life and enabling us to deliver against our ambitions.”

This purpose is “what gets us out of bed in the morning”, she adds – using science and technology to help patients get ahead of their diseases and live a somewhat normal life.

If we think of Apple or Tesla in their industries, that’s where we want to be. We want to be [seen as] the science and tech leader in the pharma industry.

GSK’s purpose ties in with the business’s new culture, summarised as ‘being ambitious for patients, being accountable for our impact and doing the right thing’.

But beyond resonating internally, with healthcare professionals and investors, GSK wants its purpose, culture and brand to resonate with its patients. As part of its new strategy, the business has outlined an ambition to positively impact the health of more than 2.5 billion people over the next 10 years.

“Although we’re not direct to consumers, we absolutely are a brand for our patients,” Wiltshire explains.

“It’s very much about trust. Not just being a trusted company, but also trusted as individuals and trusted in the partnerships we select. So the culture has really come through in all of our branding.” 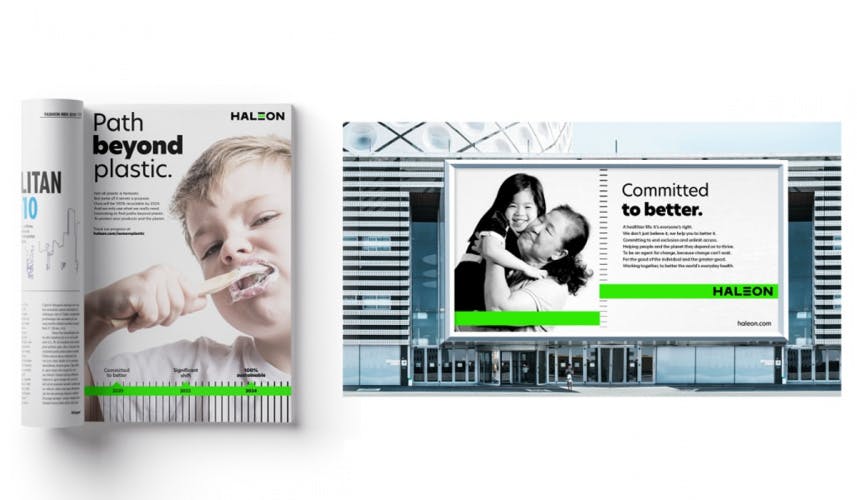