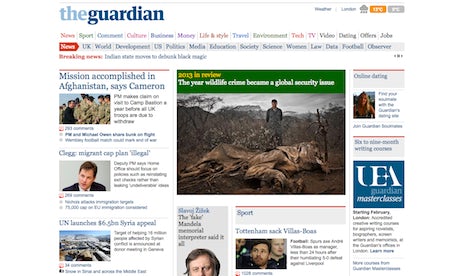 In his new role Pemsel will be responsible for integrating and leading the Guardian’s UK, US and Australian businesses to build “one truly global organisation”, the company says.

As part of the invigorated international focus, the publisher is also promoting Tony Danker – who most recently worked to launch Guardian Australia – to director of international and partnerships. He will be responsible for managing Guardian News and Media’s global partnerships with digital distribution platforms and for identifying new investment areas.

As a result of the changes Michael Bloom, Guardian US CEO, is leaving the company to “pursue other opportunities” in January.

The management team shake-ups follow a strong year for Guardian News and Media on digital. The company reported a 28.9 per cent jump in digital revenue to £55.9m in the year to 31 March 2013, which it said exceeded the decline in print revenue.

Andrew Miller, CEO of Guardian Media Group, says: “GNM is really firing on all cylinders, and we are continuing to accelerate the growth of our digital revenues and build our global audience at a pace that outstrips our competitors. In order to capitalise on the momentum we have created, now is the right time to integrate our commercial operations across the UK, US and Australia in line with our global strategy and ambitions.

“As we continue to grow we will focus on driving one global commercial strategy, to build on our enviable position as the world’s third biggest English-language newspaper website and as one of its most trusted sources of news content.”

David Pemsel joined Guardian News and Media in 2012 as chief marketing officer. He had previously been working for The Guardian on a consultancy basis and helped appoint creative agency BBH, which created its 2012 “Three Little Pigs” marketing campaign.

Prior to that he served as ITV’s group marketing director for more than five years.