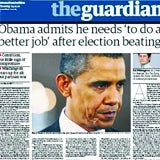 The launch of the subscription model will accompany an update to the app following approval by Apple.

The publisher is also in the early stages of developing another iPad app, according to reports.

Guardian News & Media previously charged iPhone users a one-off fee of £2.39 for its app and has clocked-up 205,000 downloads since launch last year.

It is unclear whether new versions of the app will carry a premium charge.

The US version of the app will remain ad-funded as will the global version of its mobile site.