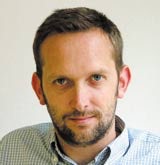 Much has been written about the compact revolution initiated by The Independent last September. Its success has been varied but both The Independent and The Times are committed to their new format, and it looks like the Telegraph and The Guardian have missed the boat.

The Telegraph was, and is, going to find it hard to convert its conservative readership to a tabloid format, and nothing could be decided until its protracted ownership saga was resolved. The Guardian has not had these factors to hold it back, so why announce the decision to produce a “Berliner” format that cannot be launched for up to two years, a full nine months after the first compact appeared?

Guardian Media Group (GMG) has long positioned itself as an innovator. The Guide, the G2 tabloid section, the Observer’s OSM sports supplement and the Guardian Unlimited website have all won acclaim. When The Independent took its risky but innovative compact gamble, the impact must have been felt keenly in Farringdon. And when The Times followed suit within two months, The Guardian was left in a difficult position: how could it stay innovative without becoming “me too”?

A tabloid format was ruled out. It was claimed that competitors’ compacts had led to a lighter editorial style not suitable for The Guardian. Rumours of a “Guardian Light”, a slimmed down, lower-priced edition alongside the main paper also came to nothing.

But the case for a Berliner is strong. Portable with a six-column grid on a wider-than-tabloid page, the new format aims to please both editorial teams and advertisers. And, given that the paper size cannot as yet be printed anywhere in the UK, the newspaper group has decided to upgrade its printing capabilities at the same time as launching the new format.

The long lead-time allows for extensive reader research to ensure the paper is right. So GMG will have plenty of time to put together a marketing plan.

A 2006 launch also enables the sales team to open an early dialogue with advertisers. Research will be wheeled out to show the improved impact of advertising on a smaller page in an attempt to recoup revenue from lost column centimetres. And the buying community will respond with claims of lower dwell time, ads running further back in the paper, increased production costs and [the advantages of?] an unproven format, to ensure costs are not passed on to advertisers.

But the two-year development period gives rivals plenty of time to plan how to undermine the Berliner Guardian. A further risk for GMG in the run-up to the launch is the newspaper’s continuing circulation decline. What if the Berliner doesn’t buck the trend? And how will readers take to a smaller format Sunday newspaper? Although The Independent on Sunday will almost certainly be tabloid by then, there is no precedent for a smaller-format Sunday.

It’s a big risk, but the quality newspaper sector changed last year and circulation performance has shown that risks must be taken. I hope 2006 will bring us a stronger, rejuvenated Guardian, which justifies its decision to stand up and say: “Ich bin ein Berliner.”

Alex Randall is head of press at Vizeum