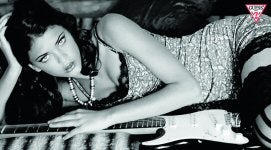 Guess, the watch and clothing brand, is planning a global expansion as part of a strategy to take the brand upmarket and boost its profile across the UK and Europe.

The strategy includes building on its reputation in the clothing and accessories market and the launch of a new jewellery collection, following a successful trial last year. It will also open nine new stores across the world over the next year.

The brand says it is planning “significant advertising spend” to support its plans, but is yet to finalise a budget.

The Guess brand is licensed to the Timex Group, which has signed a 15-year deal with the brand, and has set-up a separate company, Sequel, which will focus on its development.

Stone-Wigg says he is currently seeking a UK marketing team, which will report to him. He adds that the brand will focus on new media but there will be a global brand message that will include above-the-line work.

He says: “We are looking at new ways to communicate with our target markets via blogs, mobile advertising and third-generation technology. We will move above and beyond traditional above-the-line advertising.”

Guess will target 16to 24-year-olds, while its upmarket extension Guess Collection will target 24to 45-year-olds.

SABMiller has appointed Vinod Giri, the marketing director of SABMiller India, as international brands director for its Pilsner Urquell premium bottled beer. He will assume the role on April 2. When he takes over the position, Giri will be handed the task of developing a global five-year plan for Pilsner Urquell and then implementing it. […]

Despite much agency speculation to the contrary, advertising, for which read the relationship with Bartle Bogle Hegarty, is currently one of British Airways’ few consistent strengths. Almost everywhere you look, this is a brand in trouble. And indeed there is a poignant symbolism in the fact that the imminent cabin crew strike, which threatens to […]

VO5, the Alberto Culver-owned haircare brand, is extending its specialist offering with the launch of a new range of products specifically developed for longer hair. The new range of hair care and styling products, called Perfect Lengths, will be available in major retailers from next month. The launch will be supported by a TV and […]