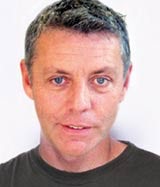 Guest was poached in May 2001 from News International where he worked for 15 years and his last position was business development manager. He was appointed as part of Myerson’s strategy to build a new advertising team following the acquisition of Express Newspapers by Richard Desmond. Under his supervision, the Daily Star has increased the amount of advertising from bookmakers and other gaming companies.

Guest reported to Express Newspapers managing director Stan Myerson and had the remit to bring in new business and steer clients towards editorial opportunities in the Daily Express and Daily Star.

It is unlikely Guest will be replaced and speculation suggests that key clients may be given dedicated account handlers within the advertising department.

Guest also represented Express Newspapers at meetings of the Newspaper Marketing Agency, the body tasked with promoting national newspapers as an advertising medium.

Desmond recently made a bid for the Telegraph Group, but was ruled out for making too low an offer. The company is still waiting for a decision by the Office of Fair Trading on whether it can take forward plans to launch a free London newspaper with afternoon distribution on the Tube.