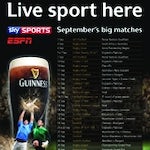 The drinks maker is launching a campaign to coincide with the first weeks of the football and rugby seasons.

The advertisements are the latest since the drinks maker relaunched Guinness last year under the “Bring it to Life” positioning.

Diageo wants drinkers to enjoy Guinness in group situations and has used sports themed advertisements in a bid to draw “a parallel between the surge of the liquid when a Guinness is poured and the energy of sporting moments”.

The launch of a fresh wave of sports-themed activity comes despite Guinness recently ending its five-year sponsorship of Rugby Union’s Premiership.

Diageo, however, says it looking to continue its association with the sport.

Activity will include outdoor and press ads as well as the continued sponsorship of Sky’s 3D channel.

Point of sale kits will also be sent to 11,000 pubs in a bid to boost on-trade sales.

Activity will start on 30 August and continue through to the October.