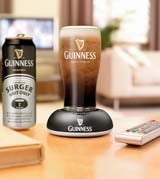 Guinness Draught in cans is set to undergo its most radical product innovation since 1989, when it launched the famous widget cans. Called Guinness Surger, the new innovation, backed initially by a &£2.5m marketing spend, promises to deliver a perfect pint in the home.

The Surger comes with a plug-in unit that sends ultrasonic sound through the Guinness Draught Surger beer to activate the settle of the Guinness in the pint, resulting in “a rich black body and a smooth creamy head”, according to the brewer.

It will be introduced first in Tesco Extra stores, before a national roll-out.

The new product, aimed at men aged 25 years and over, comes at a time when sales of the “black stuff” have been in continual decline. Parent company Diageo has given the market guidance ahead of its interim results, warning that its growth rate in the first half of the year could be below its full-year expectations. Growth in Europe is likely to be weak as a result of poor sales of Guinness and ready-to-drink products.