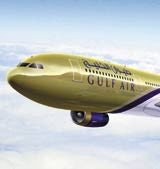 Gulf Air is reviewing its media planning and buying account as the airline looks to drive revenues following the downturn caused by the conflict in the Gulf last year.

The airline normally invests &£1.5 to &£2m in advertising in the UK, but scaled down its spend to &£100,000 last year as demand for flights to the Middle East dropped following the war in Iraq.

Its media is handled by AMS Media Group and advertising is by Communications in Business. The airline is in the second year of a three-year strategic recovery programme and carried out a brand relaunch devised by Landor in April last year.

Gulf Air strengthened its marketing team, based at its headquarters in Bahrain, last September, appointing a marketing communications manager and a destination marketing manager.

Gulf Air was founded in 1950 and is the national carrier for the Kingdom of Bahrain, Oman and the United Arab Emirates. It flies out of Heathrow to destinations in Europe, Asia and the Middle East and covers 45 cities. It launched a full service economy subsidiary called Gulf Traveller, based in Abu Dhabi, last June.