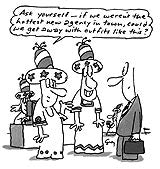 Anyone who has studied the dismal science of economics knows that life moves in cycles. Boom follows bust, dearth follows plenty, and what goes up must come down. Or, as football managers on the losing side are wont to say in post-match interviews, what goes around comes around.

Advertising is not immune from cyclical forces, as anyone who stands and watches the whirligig for long enough will attest. What’s more, there is something reassuring in seeing the same things come around again. Rather like spotting a once familiar face in a crowded bar, it’s comforting to know that some long-forgotten things are still with us.

These musings are prompted by the comments of one Marcus Fernandez, creative director of newly-opened London ad agency Myrtle. Its founders, however, do not like the term advertising agency – they prefer “brand communications company”. Their approach, they explain, is “media neutral”. In other words, first they will analyse their clients’ objectives, and then they will suggest a range of solutions, in which advertising may or may not feature. Other possibilities might include PR, marketing, or product development.

Interesting, eh? Or it would be if it had not all been said and done in the Seventies. The world has already seen the advent of full-service agencies run by eager young men and women spiritedly reinventing the wheel and calling it something else. There were once four such sprigs called Wight, Collins, Rutherford and Scott who launched their agency with the announcement that the old verities had gone and theirs was the new world. They went on to build a business that was as big and as establishment as you could wish to see.

But memory is short, especially when you are young. That is why Mr Fernandez is able to say, “The current model of advertising was invented in the Sixties, when product choice was more limited and people were easier to stereotype into categories such as income, sex and class. It was easier for advertisers to target people. Now you start knowing nothing about people, because all the old certainties are gone.”

Call me old-fashioned, but I think it is still possible to place people into categories such as sex. Broadly speaking, there is male and female, with some blurring at the edges. Income, too, is measurable and irremediably one of the old certainties, though the black economy introduces some margin for error. Admittedly, class is different, or it would be if we accepted Tony Blair’s assertion that we are all middle class now. Few, however, would, though it is undeniably true that spending power is today more evenly spread across the old class divides than it has ever been.

As for starting with the premise that we know nothing about people, if true that would bring to a halt every form of marketing, along with much else besides, including manufacturing, film and television production, writing, and the Internet.

If Fernandez is a little hazy about the Sixties, he is downright confused about the Fifties, a decade, he says, when the most effective way of increasing sales for a shampoo was simply to write “wash and repeat” on the label. Does he really believe there were no competing brands in the Fifties?

The late David Ogilvy said: “The concept of brand images, which I popularised in 1953, was not new; Claude Hopkins had described it 20 years before. The so-called creative revolution, usually ascribed to Bill Bernbach and myself in the Fifties, could equally well have been ascribed to NW Ayer and Young &amp; Rubicam in the Thirties.”

One of Fernandez’s claims is current orthodoxy, namely that today’s consumers are more sophisticated, more knowing, better able to see through the wiles of advertisers than their parents’ generation. I don’t believe a word of it. In fact, I think this is a golden age for advertising – an age in which, for the first time, the constant of gullibility is combined with the variable of income in a ratio that is unprecedentedly favourable to marketers.

According to Fernandez, many consumers may be less impressed by an ad showing Michael Jordan wearing Nike than by knowing that Nike doesn’t use Third World slave labour. Perhaps. But I would guess that for every one whose sensibilities reach out to the Third World, there are thousands for whom Nike means nothing more than cool and the Third World means nothing at all.

When the UK’s biggest-selling quality daily newspaper sees fit solemnly to place on record that David Beckham has had a “number one” haircut, it is impossible to take seriously the notion of growing popular sophistication.

Rumour has it that the true cost of Beckham’s haircut is nearer &£4m than the reported figure of &£300, since he may lose Brylcreem’s sponsorship. The company is said to fear that its product will lose popularity when worn by a bald hero. That Brylcreem is laudably innocent of Third World exploitation seems to count for nothing.