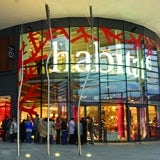 Phil Wrigley, Habitat’s executive chairman, says Styles’ marketing experience will be a “huge benefit to the ongoing turnaround programme for the business.”

Styles admits that Habitat has “lost some of its edge” in recent years against increasing competitive pressure but says there is huge potential to turn it into a global business and “regain its rightful place at the heart of the modern home”.

The furniture chain has been lead by interim CEO John Fraser since Saunders’ departure last June.

The retailer relaunched its European ecommerce site in January this year to boost its multi-channel operations.

Habitat, originally started by Terence Conran, recently pulled out of its London Regent Street store to focus on its flagship Tottenham Court Road store and plans to extend its estate with additional stores this year. It currently operates 35 UK stores, 26 in France, 5 in Spain and 5 in Germany.

Styles left Best Buy in February less than a year after the US electricals chain entered the UK market.