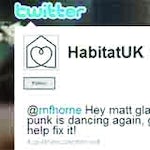 Furniture retailer Habitat has come under fire after it spammed Twitter users through the use of hash tags.

The retailer had been using hash tags, which help users track conversations on the microblogging site, to promote marketing messages that had no relevance to the topics used.

The company’s Twitter feed, HabitatUK, was putting out marketing messages such as ‘Our totally desirable Spring collection now has 20% off!’ on Friday, using tags such as #mms, #Apple, #iPhone and even used an Iranian election hashtag #Mousavi.

The brand pulled all the messages the next day and replaced them with standard marketing and sales tweets, but many members of Twitter had already seen the messages and publicly spoke of their annoyance.

A spokeswoman at Habitat said, “This was a mistake which we’re looking into. What’s important to us is that we always listen, take on board observations and welcome constructive criticism. We will do our utmost to ensure any mistakes are never repeated.”

Rhys Willians, managing partner at Agenda21, said it was another example of a big brand poorly executing a social media idea.

“In its response it has also gone for corporate behaviour, which doesn’t really work,” he said. “It made a mistake. There’s a general acceptance from Twitter users that it won’t operate for free and that there are going to be ads, but brands need to know what they’re doing and execute it correctly.”

“You need to understand your networks and Habitat understood on a technical level but not on a social level,” he said. “Brands also have to understand that just because it happened on a social network doesn’t mean people outside it won’t know about it too.”