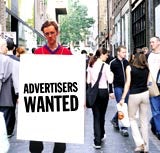 When Trinity Mirror announced last week that June advertising revenues on its national newspaper titles were down by ten per cent on last year, it sounded like further evidence that the country is teetering on the edge of an economic downturn.

But at the same time, news to the contrary was emerging from the UK high street. Coffee bar chain Coffee Republic revealed that like-for-like sales had risen by over eight per cent in a year, although the chain was still making a loss. And fitness club operator Fitness First, announcing first-half profits up by 90 per cent, boasted that it would open up to 800 clubs in the next seven years.

Advertising spending has long been considered an advance indicator of the health of the economy, and bad news from media owners such as Granada and Carlton, Trinity Mirror, Capital Radio and EMAP has been portrayed as early evidence that the UK economy is heading for a downturn. But maybe cappuccino consumption would be a better yardstick for how the economy is performing: Coffee Republic’s figures, rather than falling ad revenues, reflect the positive news coming from UK high streets, continuing rises in property prices and the fact that there are 400,000 job vacancies across the country. According to the cappuccino index, the British economy is in rude health – though some of the new media froth has been blown away.

What goes up must come down

Some believe that the downturn in ad revenues is merely a “correction” of the wild inflation that has sent the price of TV and press advertising rocketing over recent years, and that media inflation is at last slowing down to the levels seen in the wider economy.

The worrying thing about the Trinity Mirror results is that they confirm it isn’t only broadcast advertising revenues which are feeling the pinch: here is a national newspaper owner candidly admitting the extent of the problem. Trinity Mirror’s figures for the 26 weeks to July 1 show that in the first 13 weeks revenues were buoyant, but in the second quarter the situation deteriorated sharply.

Trinity’s regional newspapers performed well, mainly because of strong recruitment advertising, though revenue growth fell from 20 per cent in the first quarter to 13 per cent in the second. But the situation at the company’s national newspapers looks increasingly dire. Revenues over the whole six-month period are up two per cent, but this includes a four per cent fall in April and May and a ten per cent drop in June.

The group says: “Current trading conditions remain volatile with no signs of a return to the level of advertising revenue growth that was seen in the earlier part of the year.”

A number of explanations have been offered for this – even the delay in the general election has been blamed for causing some companies to alter the timetable for their tactical campaigns.

It’ll get worse before it gets better

Universal McCann press buying director Adam Crow says: “It is not about clients cutting overall spend, but the way they are coming into the market. The second quarter has been a disaster for newspapers. No one saw it coming.”

He adds that the downturn in ITV advertising revenues has prompted some advertisers to look again at television advertising as airtime prices fall. And Crow warns that July to September is generally the weakest time for advertising revenue, so the situation is likely to get worse. All eyes will be focused on revenue performance in October – also a crucial date for Carlton and Granada, owners of much of ITV.

Marketing Week was among the first to warn of a downturn in ad spending following the dot-com boom, with the news last August that ITV would suffer a ten per cent fall in revenues during the autumn (MW August 24, 2000). This was partly due to the phenomenal nature of the previous year’s figures, which had been buoyed up by dot-com spending, advance advertising for Euro 2000 and advertisers pulling forward their budgets to get in before the Millennium celebrations in January.

This October, the comparison will be with a weak month last year, and people are hoping that the figures will start to look a little more respectable. Zenith predicts that total advertising revenues for this year will be down 0.8 per cent, but will pick up again next year, growing by 3.7 per cent in 2002 and by four per cent in 2003. In this scenario, ad revenue growth would fall more closely in line with economic growth. In 1999 and 2000, ad revenue rocketed by almost six per cent and ten per cent respectively.

Things aren’t as bad as they seem

Procter &amp; Gamble media manager Bernard Balderston says: “The traditional view would be that a downturn in advertising usually precedes a downturn in the economy. But a lot of people are losing perspective – ad revenues are not in bad shape.”

And Theresa Wise, partner in media and entertainment practice at consultancy Accenture, says: “We have had a supply side-driven ad sales boom and subsequent recession, it is not so much consumer-related.”

She says that while last year media inflation was three per cent, in 1999 it was eight per cent. Media inflation is normally linked to gross domestic product (GDP) growth, but this year there is likely to be a dissonance between the two: while GDP is expected to rise by more than two per cent, Wise points to Zenith’s prediction of a 0.8 per cent fall in advertising revenue.

Zenith says: “This [fall] does not appear to be a direct response to anything happening in the UK economy. Inflation is relatively low and consumer confidence is high. The problem is business confidence: uncertainty over the health of the world economy, and the US economy in particular, has prompted many companies here to freeze or reduce their marketing budgets, especially those with headquarters in the US or large exposure there.”

One top economist even claims the downturn in ad spending in recent months is partly caused by the strength of the economy – when goods are flying off the shelves, he says, there is less need to indulge in expensive advertising campaigns. “Advertising growth is not as strong as it has been, but there is very strong consumer demand. The stronger the underlying demand, the less you need to advertise,” says Richard Jeffries, UK economist at stockbroker Charterhouse Tilney.

Pricing advertising out of the market

Others believe the high media inflation of recent years has driven advertisers to look at alternatives, and they have decided they can get along without mass-media advertising. They

have found that closely targeted marketing is more cost-effective in many cases. This is a view backed by John Pratt, chairman of the Chartered Institute of Marketing. “I think there are a number of contradictions. My gut view is that last year, with strong demand from dot-coms and telecoms, and the effects of Euro 2000 and the rugby World Cup, prices went up and commodity products were driven away from advertising. I have a suspicion that, as people start to worry about the economy, manufacturers of commodity products will question whether they want to go back to TV spots. Media inflation has prompted people to look at other areas, and they find they haven’t suffered for it,” he says.

Nestlé Rowntree is a case in point. As marketing director Andrew Harrison told delegates at the TV Madrid conference earlier this year, the company has proportionately reduced its spending on television advertising (MW March 29). Ten years ago, all its ad spend went through television. This has now been reduced to 65 per cent and is likely to fall to 55 per cent within five years. Kit Kat, for example, no longer confines its advertising to television, but uses radio, posters and tactical newspaper ads. Procter &amp; Gamble’s spend on television has fallen from 95 per cent of its total ad budget 15 years ago to less than 80 per cent today.

TV is losing its pre-eminence

The new media advertising bubble may have burst last year, but companies are still investing heavily in new ways of communicating with consumers. The rise of customer relationship marketing and Internet services, particularly in banking and travel, has diverted investment from advertising, after the initial burst of launch promotions. Building databases, opening call centres and operating websites does not come cheap, but marketers believe these will all enhance their ability to relate to customers and are, in many ways, superior to expensive ad spots in Coronation Street. There will always be a need for mass television advertising, especially for the launches of new products, but after the initial push there are other ways to keep brands fresh.

While there are many dark predictions about the economy which can be extrapolated from falling ad spend – “the first thing to be cut in a recession” – many people do not see an economic crisis at all, but rather a crisis in marketing. Ad revenues may slowly recover. But there will be many who believe the experience of the past two years is the beginning of the end of television advertising’s stranglehold on marketing budgets.

UKTV is extending its UK Style digital channel brand on to the Web, with a website that enables users to design virtual rooms. Visitors to the site, at www.- ukstyle.tv, can change wall colours, floor coverings and furniture to give them ideas for their own homes. UKTV is targeting the 2 million UK Style viewers […]

A survey obtained by the Diary this week reveals that marketing professionals’ fantasy boss is Dame Judi Dench’s character “M” in the James Bond films. Career psychologist Siobhan Hamilton-Phillips says the choice of M suggests that marketers “take their jobs seriously”. Proof, if any were needed, that career psychologists know naff all. Interestingly, Dench was […]