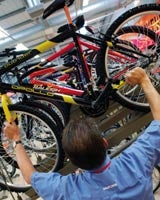 Under the control of venture capitalists, Halfords is restructuring and putting the squeeze on suppliers. Despite the threat of new competitors in its core markets, the chain will no doubt be snapped up. By Branwell Johnson

The senior management team at car and bicycle accessory retailer Halfords is intent on boosting takings so that the chain’s venture capitalist owner can profit handsomely from its investment. However, it’s questionable how well the chain can exploit its virtual monopoly in the sector to best advantage.

CVC Partners paid Boots &£410m for the company in July 2002. In March this year, it installed former Homebase chief executive Rob Templeman and commercial director Chris Woodhouse as chairman and deputy chairman respectively. The chain has 407 stores, mainly in out-of-town retail parks, and is still expanding.

Halfords is also putting the squeeze on its suppliers, demanding a ten per cent price cut and moving from a 30-day to a 90-day payment system.

Analysts say that Templeman performed well at Homebase, which was bough from J Sainsbury by venture capital group Permira in December 2000 and sold to GUS for a big profit in November last year. There, Templeman introduced new product ranges and mezzanine floors, shifting the chain’s focus from DIY to “home enhancement”.

Boots sold Halfords as a profitable concern and the chain’s last full-year results – for the year to March 31, 2002 – show a four per cent increase in sales to &£528.7m and a 29 per cent increase in profits to &£54m. However, observers say that CVC is looking for accelerated growth so that it can sell the business soon.

And Halfords is not without its problems. According to one insider, these include the remnants of an inherited hierarchical culture that is slow to make decisions. Templeman will also have to address Halfords’ positioning. Although the retailer has no direct competitors, one industry expert says “this is both a strength and a weakness”, as consumers can become confused about what the chain sells.

While Halfords is targeting both car and bicycle enthusiasts, it seems likely that the two markets are growing apart in their behaviour. Futurebrand director of consulting David Hensley says that the buying mindsets of bicycle and car customers are now very different and the Halfords environment, giving space for products aimed at both sets of customers, may act as a disincentive rather than an encouragement to spend. He believes that Halfords should become more focused. 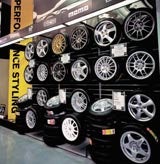 Under Boots’ ownership Halfords began rolling out its “arcade” store format, with the aim of attracting higher-spending customers. It includes areas dedicated to cyclists under the sub-brand Bikehut, as well as a car-modification business under the Ripspeed sub-brand, which offers performance parts, styling and in-car entertainment (ICE) products. The retailer’s current positioning is reflected in last year’s TV advertising, created by Abbott Mead Vickers.BBDO, using the strapline: “Halfords: start here, go anywhere”.

Urban Escape makes sense, given the consumer trend towards more leisure time. A 2001 report from the Sporting Goods Manufacturers Association said: “With the ageing population and consequent increase in leisure time and travel, the emphasis in sports participation will be less on the competitive team sport and more on leisure and individual sports. This development will stimulate the market for outdoor activities (footwear, clothing, rucksacks).”

The value of the car accessory market, on the other hand, is falling. According to Mintel, retail sales fell from &£285m in 1996 to an estimated &£267m in 2001 (at 1996 prices). However, the separate ICE category is growing, despite the fact that most new cars now feature good in-car audio systems as standard. Retail sales of ICE units stood at &£219m in 2002, compared with &£212m in 2001. The growing DVD market and the arrival of digital radio are also expected to boost sales.

However, Halfords may not be attracting the high-spending aspirational target customers it would like. Auto Express consumer reporter James Baggott says: “I think a lot of the customers are young people living at home, paying no rent and working in low-status jobs, so they have some money to spend and they’ll buy a silver ashtray for &£10 at the weekend.”

Hensley identifies a potential major threat in the European Commission’s new Motor Vehicle Block Exemption Regulation, which will dismantle the link between car manufacturers and exclusive dealerships. The legislation will allow dealers to sell models from a variety of manufacturers, and Hensley expects that they will widen their offering to include car accessories.

The UK cycling market is estimated to be worth &£500m a year (Bicycle Business), with Halfords accounting for 23 per cent of sales in 2000 (Mintel). Although retailers have reported a poor start to 2003 as the economic downturn continues, the London congestion charge has reportedly boosted cycling in the capital and the National Cycle Network, developed by charity Sustrans, is on track to cover 10,000 miles by 2005. The Government has set a target of tripling the number of cycling trips by 2010.

Experts question Halfords’ commitment to the cycling business, however. London Cycling Campaign director Simon Brammer says: “Halfords treats cyclists as homogeneous. It maybe thinks in terms of age, but not in terms of how people use bikes.”

As in the car sector, Halfords faces increasing competition in cycling. France’s biggest bicycle retailer, Decathlon, now has six stores in the UK, while supermarkets took ten per cent of unit bicycle sales in 2000.

Despite the breadth of Halfords’ business, and the threats that it faces from other quarters, one insider says that we are unlikely to see a major shift in strategy. Templeman’s aim is to transform Halfords into an attractive acquisition target, before he moves on to his next assignment.