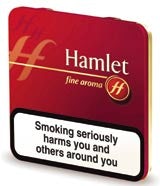 Hamlet cigars’ Aromatic brand is being relaunched in August in a smaller size with a new pack and new title, Fine Aroma.

The move is part of an overhaul for the entire cigar range that began last month with the launch of a new miniature brand called Hamlet Smooth.

The new packets for large cigars and tins for miniatures will feature embossed covers and a slightly different logo. They are being phased in over the next three months and the process will culminate with the launch of Fine Aroma. The miniature-sized Fine Aroma cigars will be sold in tins rather than packs.

The company says the repackaging across the entire cigar range is designed to make the products appear more modern and to boost sales. It hopes the repackaging will boost turnover by &£3.8m.