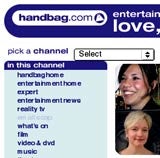 Handbag.com, the women’s website jointly owned by Boots and Hollinger New Media, is raising the curtain this week on what it bills the world’s first interactive e-mail drama.

Written by BAFTA nominated IMP Corporation, the e-soap will run for eight weeks from July 2. Entitled, “Love, life &amp; e-mail”, it will be delivered to registered users’ in-boxes free of charge. Handbag isn’t saying exactly how often these updates will arrive – simply that they will be appearing on a “regular” basis.

The virtual cast includes Jenny, a mother of two, who “craves more excitement in her life”; Catherine, a “successful solicitor who has an opinion on most of her friends’ activities”; Maiya, a “globe-trotting journalist with a secret”; and Sam, the youngest of the group, who is “lusting after Linus, a Lithuanian waiter.”

Handbag rather ambitiously claims recipients of the e-mails will “feel more like a fifth friend than an observer, copied in on all of the friends’ e-mails, referred to in some of them and called upon to influence the storyline by providing advice… when thorny problems crop up.”

IMP Corporation’s creative director and writer of The Full Monty, Simon Beaufoy, says: “E-mail is now the main form of communication throughout the world. Having shown with Running Time last year how interactive movies can enthral and entertain, this year IMP has explored other ways in which it can involve audiences in its dramas.

IMP Corporation chief executive Simon Rose believes the e-soap will capitalise on women’s increasing use of e-mail to share gossip in a “quick and intimate” way.

Handbag.com editorial director Sheila Sang says: “The drama will draw [users] into areas of the site that they may not have visited in the past.”